After leading the box office over the weekend, Disney now wants a “Free Guy” sequel, according to the film’s star Ryan Reynolds.

An individual with knowledge of the project confirmed the news of the sequel’s development to TheWrap. 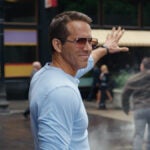 The film’s director, Shawn Levy also got in on the fun and quote tweeted Reynolds and added: “Yuuuuuuuup.”

20th Century Studios’ “Free Guy” is performing above box office expectations, thanks to a mix of strong word of mouth and, quite possibly, its theaters-only release. The Ryan Reynolds comedy earned $10.5 million from 4,165 locations on Friday and is now estimated for a $26 million opening weekend.

In fact, all three of this weekend’s new releases, including Sony/Screen Gems/Stage 6’s “Don’t Breathe 2” and MGM/UA’s “Respect,” are now estimated to open above the second weekend total of Warner Bros.’ “The Suicide Squad,” which only grossed an estimated $2.2 million on its second Friday — an 81% drop from opening day — and is now estimated to drop 73% from its $26.2 million opening weekend for a $7.2 million second frame that will put it at No. 5 on the charts.

In his review of the film, TheWrap’s Carlos Aguilar wrote, “Less inventive that it gives itself credit for, ‘Free Guy’ qualifies as a summer blockbuster with something mildly compelling to say; not the most articulate or substantial in its exploration of its most interesting ideas, to be sure, but enjoyable nonetheless. So few of these expensive releases care to be more than crowd-pleasing escapism that the mere effort to engage with real-world concerns like gun violence comes off as creatively valuable.”