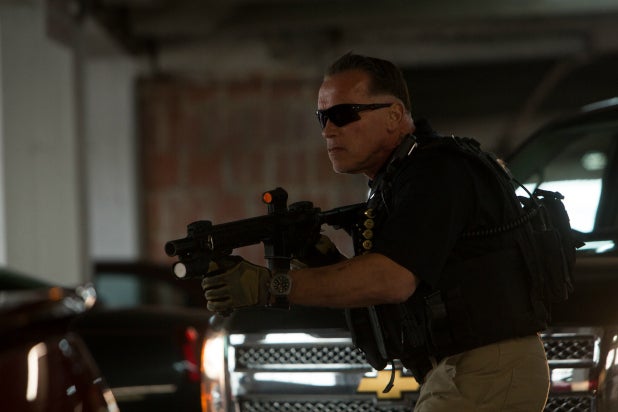 Nothing really gets sabotaged in “Sabotage,” unless you’re counting the career of director David Ayer, who got some of his best reviews to date for “End of Watch” just two years ago. Apparently forgetting everything he knows about filmmaking in the intervening months, he’s delivered up a schlocky and semi-incoherent shoot-‘em-up, the most notable factor of which is a torrent of fake blood that rivals the gallons of Karo syrup Brian De Palma sprayed over “Scarface.”

It’s a testament, perhaps, to Arnold Schwarzenegger‘s star power that this choppy mess (co-written by Ayer and Skip Woods, who gave the world “A Good Day to Die Hard” and “X-Men Origins: Wolverine”) didn’t go straight to DVD where it belongs. But like its star’s post-political film career, “Sabotage” is listless and joyless; the results feel cynical, slapdash and a waste of time for all concerned.

See video: Arnold Schwarzenegger Becomes a Target After Being Betrayed in ‘Sabotage’ Trailer

Schwarzenegger stars as John “Breacher” Wharton, a legendary DEA agent whom we first see agonizingly watching a video of his kidnapped wife being tortured by off-screen villains. A few months later, he’s leading his squadron of undercover agents — who’ve spent so much time around scumbags that they’re fairly indistinguishable from their prey — on a raid of a drug compound that’s also a heist.

The plan is that Breacher and his crew will steal $10 million, hide it in the sewers, then burn up the rest of the money so no one ever knows it’s gone or tries to trace the loot. Unfortunately, the FBI had been watching this particular cartel and their stash of cash; even more unfortunately, someone steals it from the sewers when Breacher and the other DEA agents go to recover it.

Six months of investigation pass, but the group never breaks rank. But once Breacher gets his gun and badge back, his people start getting picked off one by one, in ways that resemble the drug cartel’s preferred methods of revenge. Are their former targets coming to get them? Is it someone inside the team? And whatever happened to that stolen money, anyway?

These are the questions that Atlanta homicide cop Caroline (Olivia Williams) has to answer as she starts investigating the murders. At first, the hard-partying DEA agents blow off the sensible-shoe-wearing detective, but as more of them meet grisly ends, they start turning to her for help.

See video: Jimmy Fallon and Arnold Schwarzenegger Goof Off in a QVC Spoof

Breacher’s crew is a fairly indistinguishable bunch of meatheads; talented performers like Terrence Howard are given almost nothing to play. The one person here who stands out — and winds up walking off with the movie, for whatever it’s worth — is Mireille Enos, as a speed-freak adrenaline junkie who’s as tough as any of the men around her, if not more so, and eager to start a ruckus whether she’s got a shot glass or a semi-automatic in her hand.

Ayer (who also wrote “Training Day” and directed “Street Kings”) clearly loves police work; you may never see another movie that provides as much detail about how to sweep through a house room by room. But “Sabotage” is a mess, from some terribly-acted scenes (get ready to cringe whenever anyone starts yelling) to ambitious editing (whereby a murder and the later investigation of it seem to be happening simultaneously) that doesn’t really pan out.

(For what it’s worth, this film represents the first — but I suspect not the last — time that I’ve seen a director attach a GoPro camera to a a gun and then point it at the shooter.)

There’s also the matter of questionable accents, from Sam Worthington (who generally comes off as a credible character actor here) slipping into his native Australian to Williams’ embarrassingly all-over-the-map Southern drawl. Any movie that already has Schwarzenegger sounding Austrian for no apparent reason can’t afford to have any more off-kilter diphthongs.

“Sabotage” will one day have a very long “Goofs” page on IMDB — my favorite is when an Atlanta police officer says, “Be careful, they’ve killed two DEA agents!” at a point in the film when it’s actually three who are dead — but unless you’re the person compiling that list, there’s no good reason to endure this movie.