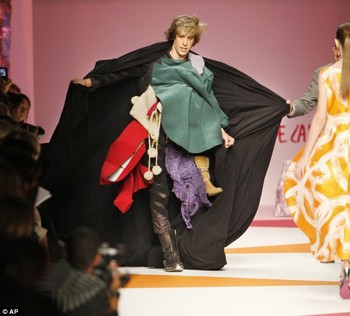 Sacha Baron-Cohen has been arrested twice now in Milan for crashing his way down the catwalk as he shoots his new cinema verite film as the fashionista character, "Bruno." Here he is in a velcro suit at the Agata Luiz della Prada show. As he was arrested, he covered his head with a green piece of fabric, perhaps to keep more of the film under wraps. I’m sure Universal, who is producing the film, doesn’t care that he’s wreaking havoc with fake credentials and sneaking past security to get backstage.

If I were going to get myself arrested, it would definitely be in Italy. I’m sure the food in jail is a lot better. And the carabinieri would probably let me call my mother.