They were filed quietly in the district court of Travis County, using only initials to identify the parties involved. Bullock was identified as B.A.S., which is her initials backwards. James was listed as J.J.G.; his middle name is Gregory.

The filing says, "The parties were married on or about 2005, and have ceased to live together as husband and wife."

As grounds for divorce, it says, "The marriage between Petitioner and Respondent has become insupportable because of discord or conflict of personalities that destroys the legitimate ends of the marriage relationship and prevents any reasonable expectations of reconciliation."

It also says there are no children under 18 entitled to support who was born or adopted during the marriage. 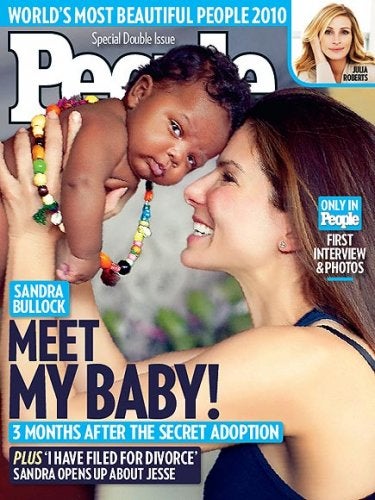 However, Bullock is pictured on the cover of the May 5 People with the baby boy she adopted. According to People, she and James began the adoption process four years ago. They brought Louis Bardo Bullock, a 3½-month-old boy born in New Orleans, home in January, but decided to keep the news quiet until after the Oscars.

News of James’ infidelity broke right after the March 7 awards, however, derailing that plan.

Bullock tells People she is now finalizing the boy’s adoption as a single parent.