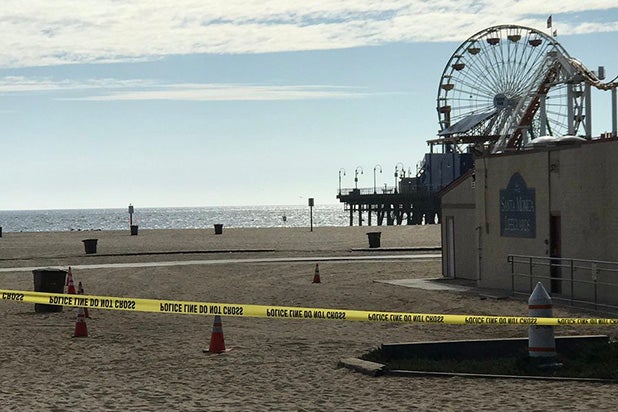 Police officers evacuated the Santa Monica Pier on Monday afternoon due to a bomb threat.

Photos shared to social media showed the area being closed by Santa Monica police, and the city’s official Twitter account sent a message on Monday afternoon urging people to avoid the pier and the neighboring Ocean Avenue due to “police activity.”

KABC reported that aerial footage showed a bomb robot sweeping the parking lot after it was evacuated. The threat was cleared after just over an hour later.

The scare came after police received bomb threats via two phone calls, one from Culver City and the other from Hawthorne.

A popular Los Angeles tourist attraction, the Santa Monica Pier has been featured in films including “Iron Man,” “Titanic,” “Forrest Gump” and “They Shoot Horses, Don’t They?”

@Venice311
Bomb scare
everyone is getting evacuated from the Santa Monica Pier pic.twitter.com/h3fzJT5h1Y

SMPD can confirm a bomb threat was received regarding the Santa Monica Pier. Please continue to stay away. More info to follow.