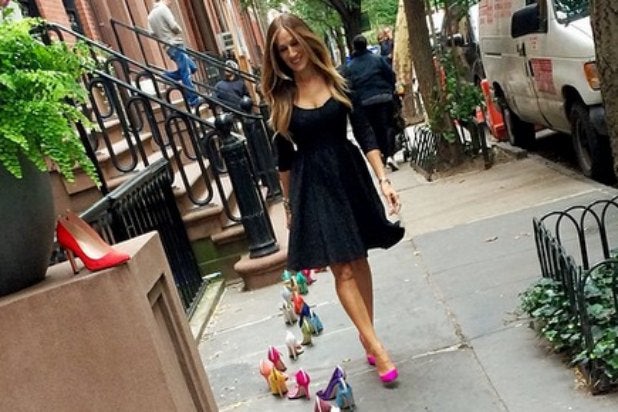 Sarah Jessica Parker returned to the famed stoop of her “Sex and the City” character Carrie Bradshaw in order to promote her shoe line, SJP Collection. The only problem is the NYC residents who actually live there aren’t exactly fans of the iconic HBO series.

The residents of 66 Perry St. in Manhattan’s West Village have installed a chain and a “No Trespassing” sign, warning “Sex and the City” lovers not to set foot on the steps. The sign was ignored however by Parker, who posed her shoes on the stoop and down the sidewalk and snapped pictures for her Instagram page.

Parker also did not get permission from the city to shoot in the location, nor did she get authorization from the people who live in the building now, according to reports.

A source told the New York Post: “The owners are up in arms as they deal with relentless tourists, and SJP has ignored their requests for an explanation on how she could endorse the shoot, even though ‘no trespassing’ signs are posted. SJP used their house during the years of filming, and now won’t acknowledge that she and her company used the steps and facade, this time without permission, to promote her shoe line.”

Gerald Banu, president of the Perry Street Association confirmed that Parker had no permit to shoot on the street or the stoop. He also offered a suggestion to the screenwriters of the rumored “Sex and the City 3” film.

“The only thing I could suggest to SJP is that when they write the next script, please have Carrie move to a new address,” Banu said.