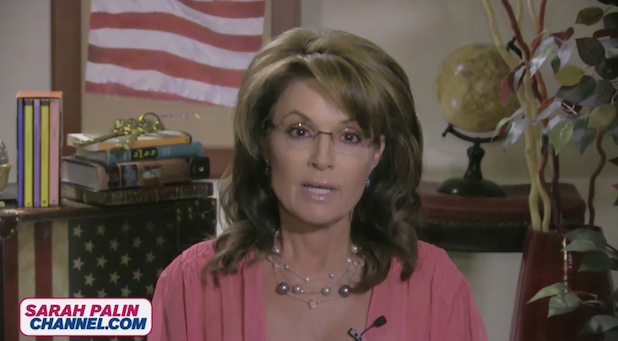 The former Republican vice presidential candidate did her best Manohla Dargis impression this week on her subscription-based Internet channel when she reviewed “The Giver,” Philip Noyce’s adaptation of the popular YA novel by Lois Lowry.

Palin opens her review by quoting a legend of the silver screen — Ronald Reagan — before suggesting that “there is no such thing as a left or right, there’s only an up or down,” though she isn’t referring to thumbs.

Instead, she rails against the dangers of a society that is willing to trade freedom for security.

“‘The Giver’ depicts a society where the government has grown well beyond an anti-state,” Palin says. “The government in the movie limits every aspect of life — where to live, what to wear, what to eat, who to marry — to make a society that doesn’t have pain or risk, supposedly, to create some kind of utopia. Sound familiar?”

She then explains how the main character, Jonas (Brenton Thwaites), painfully learns “what soldiers and the parents of soldiers know all too well — that freedom isn’t free and it isn’t risk-free — in fact, it’s hard and complicated and it might cost you your life.” Gradually, Jonas learns “what Reagan knew and what some of us still know today — freedom is worth it.”

Palin also uses her new platform as a film critic to engage in some good old-fashioned fear-mongering.

“This movie shows us exactly where we’re headed if we don’t inject into our culture a little courage, tenacity and rebellion against a government all too eager to take away our freedom,” said Palin, who drew comparisons between “The Giver” and Katniss’ rebellion against the government in “The Hunger Games.”

“The funny thing about governments is, the bigger and more powerful they grow, the more they disrespect the lives of their citizens,” she added.

Palin also singled out Meryl Streep for her contribution to the film.

“I’m really encouraged that someone like Meryl Streep lent her talents to a movie that so powerfully conveys truths about the way our culture is and the way it could be if we just had enough courage to fight back when we realize something is horribly wrong.”

Also read: Meghan McCain Rips Sarah Palin’s Online Channel: ‘I Got All My Sarah Palin I Need for One Lifetime’ (Video)

Palin ended her review with a line that would make even the biggest film critic hack proud when she concluded, “I think ‘The Giver’ would’ve make ‘The Gipper’ really proud.”

Head over to Sarah Palin’s website to watch her full video review of “The Giver.”