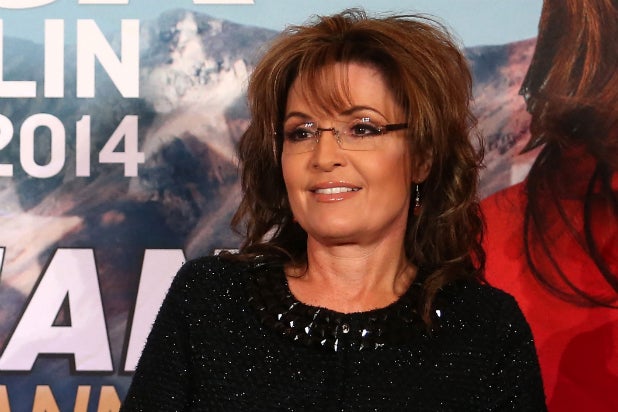 Former Alaska Gov. Sarah Palin can comfortably split her time between Fox News Channel and her new Sportsman Channel series because both aim to spread the pro-American message and restore the country’s global leadership, she told TheWrap.

“Fox really gets it, you know. They understand what it’s gonna take for American exceptionalism to be restored,” Palin said following her presentation for “Amazing America” at the Television Critics Association winter press tour on Friday.

“They understand that getting more people active and productive and living a real industrious type lifestyle – that our show will showcase – actually helps the cause of Fox too, so it’s mutually beneficial.”

The Sportsman Channel series will follow Palin – who returned to Fox News as a contributor last year – as she visits people and places around the country that “embrace, and encourage, and inspire more of that American spirit that we need more of.”

“What our show is gonna do is help fundamentally restore that, restore that Americana spirit, that built us, that laid the foundation for where we are today,” Palin said.

Palin also said she is particularly keen on inspiring young women by profiling the rough-and-tumble ladies on her show.

“I want young women to be inspired by the show that we’re gonna put together,” she said. “One of the reasons is that I think this world would be better off having more young women holding a fish in a picture and fewer of ‘em holding their camera in front of the bathroom mirror doing a selfie.”

Palin told TheWrap that her contract with Fox News needed to allow for filming on the Sportsman Channel series, which she says is her “most favorite thing” that she’s done in recent years.

“I am so thankful for Roger Ailes allowing me to do the Sportsman Channel show,” Palin told TheWrap. “It was part of the negotiations to come back to work with Fox, was to be able to do this.”

“In fact I’m more excited about this project than I have been about many of the other projects and things that I have done in the past,” she said during the presentation.

But pressed on what those less enjoyable past projects were, Palin didn’t kiss and tell.

Palin also brushed off a question about a new book claiming Ailes offered a Fox News employee a raise in exchange for sex.

“That he paid what?” she asked, apparently unaware of Gabriel Sherman’s upcoming biography of Ailes, “The Loudest Voice in the Room.” TheWrap told her about the claim.

“I think bogus rumors like that are really a waste of time especially when I want to talk about being red, wild and blue in America,” she said, quoting the Sportsman Channel’s slogan.

“But ask me something about the great outdoors and I’ll be happy to answer ya. Come on, think of something!”

She then repeated an invitation she made to all the reporters covering the panel: “I want you to come up to Alaska,” she said. “And then we don’t criticize anymore.”

Sportsman Channel’s “Amazing America” is slated to premiere in April.