The former Alaska governor scored a one-on-one with the GOP presidential frontrunner which will air on One America News Network, a conservative news channel available on a limited number of cable TV systems.

Palin took to social media to promote her interview with The Donald, and told her Facebook fans she won’t be asking the candidate any “gotcha” questions about the Bible.

“WTH? Lamestream media asks GOP personal, spiritual ‘gotchas’ that they’d NEVER ask Hillary, or they’d feed the question to her and/or liberal cohorts before they asked it on-air (we know how these things work, lapdog media… the public’s on to you), so good on Trump for screwing with the reporter,” she wrote on Friday, referring to Trump’s recent interview with Bloomberg’s Mark Halperin, in which the presidential candidate refused to talk about his favorite verse because it’s “very personal.”

Palin will also interview former Florida governor and presidential candidate Jeb Bush, who is promoting his new e-book, “Reply All,” to be released Oct. 30.

The lovefest between Trump and Palin has been going on for weeks now.

Last month, the GOP frontrunner said he would definitely consider the former VP candidate for a cabinet position because Palin is a “special person” who “knows what’s happening.”

OANN is available on Amazon FireTV, Roku and KlowdTV, an online streaming service. 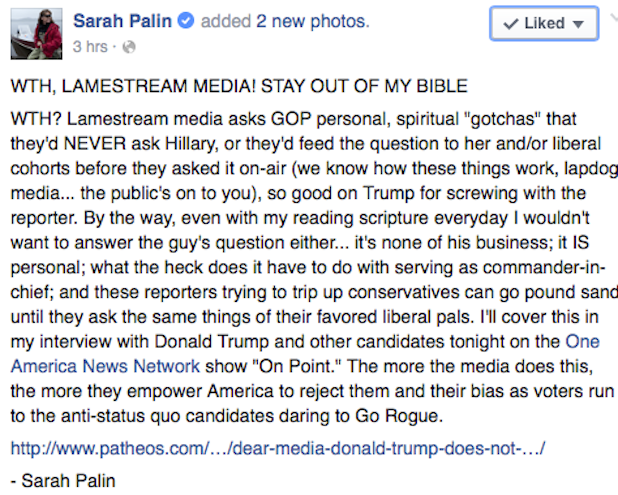