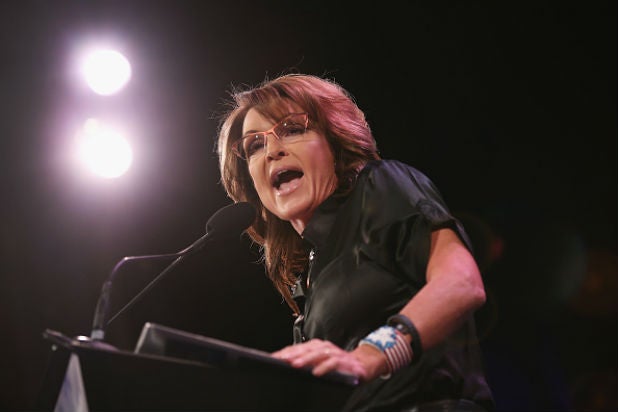 Sarah Palin thinks ESPN made a big mistake by suspending Curt Schilling over a tweet comparing Muslims to Nazis.

“ESPN – what happened to you? Your intolerant PC police are running amok and making a joke out of you!” Palin began in a lengthy Facebook post. “By picking and choosing who they’ll tolerate and who they’ll try to destroy, ESPN has zero credibility as a sound and reasonable media outlet.”

Palin went on to blast the sports network for suspending Schilling but tolerating what she described as “misogynist” attitudes and violence towards women.

“[There’s] been crude, rude bile spewing from the once-great sports network for years now. Trust me. I know. My name and reputation’s been in it,” she wrote. “One ESPN affiliate’s on-air rant featuring their misogynist, animalistic “analysts” grunting and giggling through an entire x-rated celebration of violence against women didn’t even draw a chirp from ESPN’s wussified leaders.”

Palin also said that Schilling’s tweet, which stated that the 5-10% percent of Muslims who are viewed as extremists was comparable to the percentage of Germans who were Nazis during World War II, was completely accurate.

“In fact his stats were too generous in estimating Muslims’ attitudes,” Palin said. “Reports show it’s 88% of Egyptian Muslims favoring DEATH [sic] for anyone who leaves Islam. The majority of Muslims in many other places share the sentiment. In America, these views could be correctly described as ‘extreme.'”

“From those of us who used to LOVE [sic] the network (to the point of addiction, some would confess!), I say to ESPN – you are awful in this. Stick to sports,” she concluded.

Schilling began apologizing immediately after ESPN suspended him, telling one Twitter user, “That didn’t come across in any way as intended or interpreted.”

In a subsequent tweet, Schilling formally apologized: “I understand and accept my suspension. 100% my fault. Bad choices have bad consequences and this was a bad decision in every way on my part.”