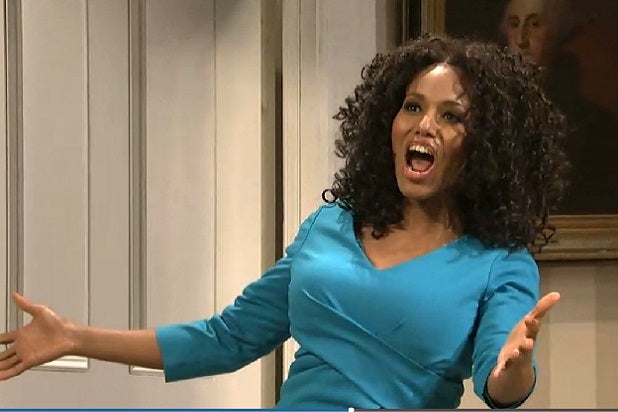 “Saturday Night Live” took aim at its own lack of diversity this weekend, when “Scandal” star Kerry Washington was called upon to perform as multiple black women, including Michelle Obama to Oprah Winfrey, during the opening sketch.

It was a not-so-subtle reference to the fact “Saturday Night Live” hasn’t had a black female cast member since Maya Rudolph left the show — and cast member Kenan Thompson‘s recent suggestion that there aren’t enough qualified candidates to bring onto the show.

“It’s just a tough part of the business,” Thompson told TVGuide.com. “Like in auditions, they just never find ones that are ready.”

Reaction to “SNL’s” semi-acknowledgement of its race problem has been mixed: While Gothamist didn’t find anything particularly wrong with the sketch, Ben Yakas did say that it was “weird” to see “SNL” take a shot at itself that cushioned its own blow with humor.

“It worked as a commentary on the situation, but it was weird: ‘SNL’ got to address the elephant in the room, and sort of apologize about it, while at the same time confirming that nothing was really going to change anytime soon,” Gothamist’s review of the episode read. “On the one hand, Washington was great in the sketch, and the six Matthew McConaugheys were inspired. On the other hand, the Rev. Al Sharpton deflated the gravity of the self-analysis by ending the sketch with an exasperated ‘oh well.'”

The website “Bustle” was less kind in its appraisal.

See video: ‘SNL': Eminem’s Not Having Fun in New Promos

“It’s almost like a punch in the gut — not only are the producers of ‘SNL’ aware that they have a glaring lack of diversity in their cast, but they reduce it to ‘not ideal’ and promise that they’ll get to it ‘eventually,’ as if representing black women in their cast was akin to replacing the head on their electric toothbrush,” Bustle’s Maitri Mehta opined.

The Daily Beast, meanwhile, heaped praise on the sketch for handling the issue in “brilliant fashion.”

“This is ‘Saturday Night Live,’ a show that has built its reputation on three decades of biting into controversies with fang-baring irreverence. But it’s not often that the show chews up its own controversy,” Kevin Fallon wrote in the Beast. “It’s not surprising that SNL would be clever enough to address a sensitive issue that sits so squarely on a precarious line — politically incorrect comedy on one side, flat-out offensiveness on the other — with such nimble confidence and hilarity. But it is refreshing, and a relief, that it can walk the tightrope of its own controversy just as skillfully.”

EW.com applauded Michaels for his brazen willingness to tackle the subject.

“Race can never really be taken off the table,” Jodi Walker wrote.  “And hot damn, did Lorne Michaels ever put race all over that sketch table last night!”

Watch Washington’s “SNL” opening sketch below and share your thoughts in the comments section.