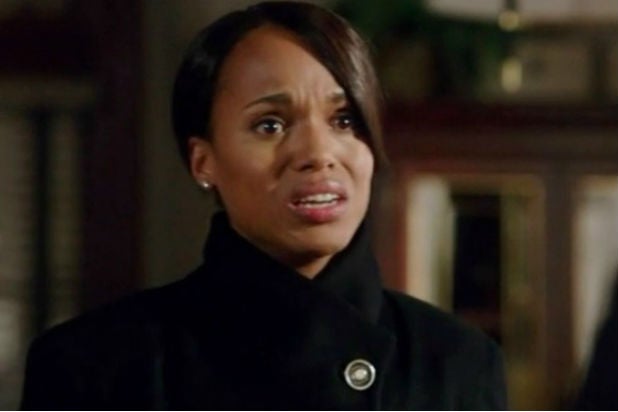 (Spoiler Alert: Please do not read on if you haven’t watched Thursday’s episode of “Scandal”)

In the eyes of her fans, Shonda Rhimes can do no wrong — and that was certainly true on Thursday night with “Scandal’s” latest powerful episode, “The Lawn Chair.”

The ABC drama turned its attention on the difficult and emotional topic of police brutality and hit close to home for many viewers.

The episode began with the haunting image of an unarmed black teen named Brandon Parker lying dead in a Washington, D.C. street a few miles away from the White House. When his distraught father, Clarence (Courtney B. Vance), positioned himself between the body of his son and police with a shotgun, Olivia Pope (Kerry Washington) was called in to manage the sensitive situation.

Sparking memories of the Ferguson shooting of Michael Brown, Pope was caught up in the moral dilemma of the injustice before her and her role as a crisis manager. She promised Clarence she’d get Attorney General David Rosen involved (he was sadly too busy dealing with other issues), and then clashed with neighborhood activist Marcus Walker who arrived with the titular lawn chair, which the mourning father placed over Brandon’s body. “In case it rains or something. I want him to be protected from the elements,” he said.

Behind the scenes. #scandal Marcus and Liv

Olivia then managed to pull off some Pope-esque wrangling to get video footage of the shooting. “That man standing over his son’s body thinks he’s going to end up in one or two places: jail or a drawer in the morgue … I lived in complete fear,” she told Rosen, referring to her own recent kidnapping. “Imagine living like that every single day of your life.”

The artful handling of the mystery of a knife under the body and a potential police cover-up amid mounting racial tension prompted praise from many viewers who took to social media after the episode aired.

Meanwhile Judy Smith, a.k.a. the “real Olivia Pope,” tweeted: “The conversations in tonight’s episode aren’t easy but they must happen. To move forward, we must talk to each other.”

Even Washington and Rhimes were blown away with emotion watching the episode they had created.

Damn it @shondarhimes – I made it through the West Coast airing without crying… until I read that tweet. #Scandal — kerry washington (@kerrywashington) March 6, 2015

Also Read: ‘How to Get Away With Murder’ Creator on Finale’s Killer Reveal: ‘You Have to Pay Close Attention’

In the end, we went with showing what fulfilling the dream SHOULD mean. The idea of possibility. And the despair we feel now. #scandal

The conversations in tonight’s episode aren’t easy but they must happen. To move forward, we must talk to each other. #Scandal#TGIT — Judy Smith (@JudySmith_) March 6, 2015

The fact I found truth and insanity in everything he said? Epic power move. @kerrywashington @shondarhimes #Scandal — NrsDee (@GyrlGrey) March 6, 2015

It took a fictional character to bring justice to the everyday crimes against Black Men? #Scandal — SHEKINAH (@ShekinahJo) March 6, 2015

Now I know why my wife called me crying after the east coast feed of #Scandal. #TGIT

Just got home to see the east coast feed of #Scandal. I’m so moved…so unbelievably proud to be a part of this incredible show.