Not quite a musical, sort of a folktale, and almost but not entirely a hardscrabble hunk of post-war realism before all of a sudden changing gears, “Scarlet” – which opened the 2022 Cannes Film Festival’s Directors’ Fortnight sidebar on Wednesday – is a tricky project to pin down. Of course, director Pietro Marcello wouldn’t have it any other way.

Shooting in French for the first time, the Italian filmmaker made his name with documentaries before working found and historical footage into the world of make-believe with 2019’s “Martin Eden.” With this more ambitious (if more uneven) follow-up, Marcello continues at a similar pace, folding fact into fiction as he explores both the landscapes of rural Normandy in the aftermath of the First World War and the plight of the working poor, all through the crags of his leading man’s brow.

That brow (and those crags) belongs to Raphael (Raphaël Thiéry), who we discover limping home from the front interspersed with historical footage of fellow soldiers doing the same. A hard man with a soft heart and the features of a ragged John C. Reilly dressed up as the Golem of Prague, Raphael returns to his village to learn that his wife has died and left him to raise the daughter he never knew existed. Once again, he reports for duty. 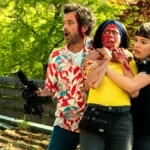 Before shifting focus to daughter Juliette (played by a number of child actors and newcomer Juliette Jouan as a young adult), Marcello’s 16mm camera lingers on the lumbering veteran, focusing on his calloused hands, his fraught relationship with his fellow townsfolk and his painstaking work as a carpenter, giving the opening act an almost ethnographic feel.

Somehow, this seems to be a trend among modern Italian directors. Like contemporaries Alice Rohrwacher (who contributed to the three part doc “Futura” alongside Marcello) and Alessio Rigo de Righi & Matteo Zoppis (whose film “The Tale of King Crab” played alongside “Futura” at last year’s Director’s Fortnight), Marcello revels in folklore and celebrates tradition while casting suspicious glances at anything too new.

Indeed, as “Scarlet” mostly observes the artisan through its first half, it reaches a kind of mission statement when a shopkeeper turns down Raphael’s hand-crafted toys because they are not in line with the modern baubles preferred by Kids These Days.

While Raphael is a craftsman, Juliette is a songbird, so when the film pivots, it quietly swaps styles, segueing into a register seemingly borrowed from the work of Jacques Demy as the lonely young girl wanders the forests around her home, filling the air with song.

Without ever getting too precious about it, Marcello contrasts these two registers by playing the earthiness of Juliette’s home life – also represented by actress by Noémie Lvovsky as the maternal farm-owner who offers the father and daughter room and board – against the subtle enchantments of the wider world.

With that scheme in mind, who else can complement actor Raphaël Thiéry’s granite block countenance than a polished Louis Garrel, really leaning into silent-film dandyism as a rakish aviator who (quite literally) falls into Juliette’s life?  And who can underscore Noémie Lvovsky’s homespun practicality than the self-proclaimed town witch, played by actor Yolande Moreau under a shock-blonde mop of hair? And who can fault the filmmaker for his ambitions, even if this switch from period-to-magical realism doesn’t fully cohere in a satisfying way?

Boasting a number of new pieces written by Marcello, performed by actor Juliette Jouan, and scored by composer Gabriel Yared (“The English Patient”) that all feel as if they were discovered in a century-old songbook, “Scarlet” is a kind of very modern throwback, mixing a certain kind of modern Italian style with the dream of French cinema of old. It’s a bit of a mess, no doubt about that, but a fascinating one. While it may not reach the heights of Marcello’s previous work, as a fitting opener for this year’s Director’s Fortnight, boy does it soar.