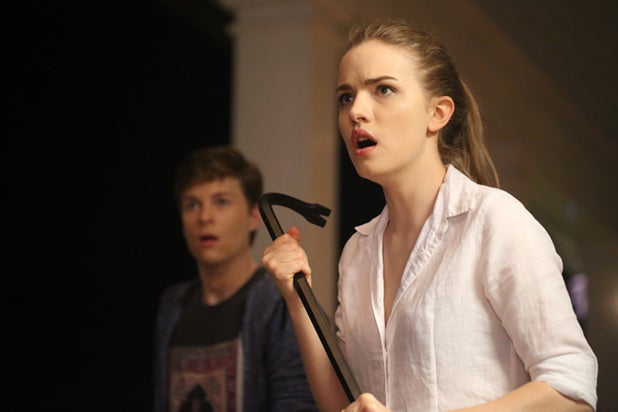 (Spoiler alert: Please do not read if you haven’t watched Tuesday’s finale of “Scream”)

Piper Shay, the true crime podcaster played by Amelia Rose Blaire, was revealed to be the baby given up by Maggie when Brandon James was killed 20 years ago. Upset about having been denied the life that Emma was given, she chose to exact her revenge as a knife-wielding killer, culminating in a final confrontation on the same dock where her father was shot dead.

“I just remember putting on the mask, putting on the cape. And I had these huge combat boots and the knife in my hand,” Blaire told TheWrap. “My whole body was shaking, and I felt like I had a black hole in my center. I honestly don’t remember what happened after the mask came off. I just went somewhere else.”

Here, the actress reveals how she prepared for the final confrontation, her thoughts about “Scream” creator Wes Craven’s recent death and whether she might return for the second season.

When did you find out you were the killer?
On my last day of doing Episode 6, right before doing the scene in the car dealership with Will. So that definitely had changed a lot of things for me, but I didn’t see it coming at all. I was convinced it had to be someone else.

What was your reaction?
I was completely shocked that I was going to get to do that, and very excited. And then extremely intimidated and daunted. I had kept this very intense bible of everything that the killer had been doing and every little clue, so to then go back and put myself there was so trippy. And creepy, honestly.

Did you try to work that into your performance?
I tried not to let it come out, because I didn’t want to give myself away. And I think Piper would have kept it way under wraps. Of course knowing something that big changes the way you step into a room or a scene with another character, but I kept trying to come at it where she is just trying to get Emma to trust her and confide in her. So that in the end, when she finally does twist the knife in, it has much more of an impact.

This is so different than anything else you’ve done. Did you do anything special to prepare?
I definitely did a lot of preparation. Bobby Campo, who plays Seth Branson, helped me a lot. We were in Baton Rouge, Louisiana, so we had spent three and a half months away from home. But once I got there, I just let rip and all of that emotional preparation that I had done flooded out in all sorts of directions.

What drove Piper to murder? Why did she want so badly to get revenge on her mother?
All we know is that Piper was given up for adoption. What kind of home she ended up in, we don’t know. But judging from where she ended up in the end, it must have been a very dark place. I think she was constantly trying to figure out where she belonged, always feeling like she was on the outside, or didn’t understand why she had this deep sense of unrest in her. To then discover that she had been given up by this woman who turned her father into a monster figure and had another daughter who was given the perfect life. I think that just enrages Piper to her very core — and she blamed Maggie for all of it.

Was her friendship with Emma just part of the plan or was part of it sincere?
I think that there was a part of Piper that really did like Emma, and really did want to be in her favor and become her friend, but then there was this other side that also hated her and wanted her to suffer. It was a very conflicted, emotional relationship.

So is Piper definitely dead?
I don’t know if she’ll come back again next season. I would love to get the opportunity to play this other side of her. Because essentially for the whole season I was playing Piper with this mask on. But I don’t know… I think she’s probably dead.

Is it right to assume from the end of the episode that Audrey was working with Piper?
Piper definitely has an accomplice. She definitely couldn’t have done all of it on her own. So who that person is… I’m very excited to see what they’re going to do next season.

Were you a fan of the original movies?
I remember the first time I watched the original “Scream” movie — probably when I was old enough to watch it in middle school — I was with my sister and we watched it and immediately rewound it and watched it again. We were absolutely hooked. I was so fascinated by Billy [Skeet Ulrich’s character]. I love that character in particular. So to get to be a part of the “Scream” series and then be Ghostface in the end was just unreal.

What was your reaction to the news of Wes Craven‘s death?
We wouldn’t be making this show if it weren’t for him. He was a great visionary and left behind a great legacy. It was an honor to get to continue with that legacy.