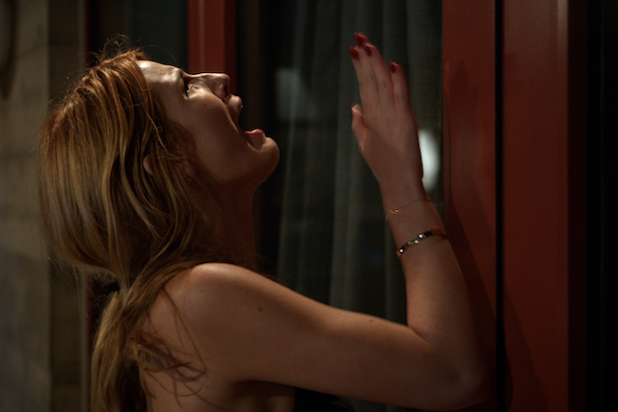 MTV raised eyebrows when it announced that it was adapting the classic “Scream” horror film franchise into a TV series. How do you stretch a slasher movie out over 10 episodes? (Or more, assuming the series gets renewed.)

According to showrunner Jill Blotevogel, the secret is taking the successful elements from the Wes Craven film series and “genetically splicing” them into a structure better suited for television. Where a slasher movie runs on adrenaline from kill to kill, “Scream” the TV show will operate on a deeper central mystery and a healthy dose of teen drama. (It is MTV, after all.)

In an interview with TheWrap, Blotevogel discussed adapting the show’s new format, the killer’s new mask and making peace with spoilers.

TheWrap: What can viewers expect from the show?
Blotevogel: In the pilot, you hear Noah set up the challenge of trying to do something like this, that you can’t do a slasher movie as a TV series because the pace just goes too quickly. And yet, by the end of the episode, he sort of counters that a little bit. If you can slow it down a little bit, if you can find the “Friday Night Lights” of it, the teen drama of it, and create a bigger mystery at the heart, then maybe you can do it.

We’re going to give you this great cast of characters, create this world, this high school where they have all the same problems of any high schooler — dating, falling in love, bullying, harassment. And yet there’s this added element of a murderer. There’s a mystery. And so we had to add things that you didn’t necessarily have in the “Scream” movies … For me it was finding the things that worked in the “Scream” franchise and genetically splicing it with what works really well on TV.

How do you appeal to both new viewers and fans of the film series?
In a movie, whenever the first couple of murders start happening, everything goes to hell. For a series, if that happened in episode two you wouldn’t be able to have kids going out on a picnic, or a field trip or a football game … It’s finding ways to control your world so that it doesn’t have to become so frantic and so huge right away. But of course as soon as you get to a certain point and you’ve had murders take place, you’ve got to establish that things are getting a little out of control.

Do you plan to set the series apart from the movies?
The original series revolved around (Neve Campbell’s character) Sidney. She continued to be the heroine, chapter to chapter, and her world kept being repopulated by new disposable characters … There was some early talk about perhaps doing each season as a sort of separate anthology-type story with a new town, a new killer, a new heroine. But we very quickly realized that we really liked our core cast and our core characters. That’s what made us say, “Let’s take the mystery and make it bigger and make it deeper. And let’s take the characters and make them richer” … MTV loves the new talent that we found and we’re just in love with them. Except for when we kill them, we definitely plan to keep them around.

Was it an intentional decision to cast so many lesser-known actors?
Not necessarily … We saw a lot of bigger names who weren’t right for the part and we kept looking — that’s how we were able to assemble a cast that’s unbelievable. And to have Bella (Thorne) for the opening kill is so much fun. She’s just the right personality; an amazing combination of charm and bitchiness. You can kind of care about her, and you kind of hate her … I always compare it to the death of Laura Palmer at the beginning of “Twin Peaks.” You find her dead and you don’t know much about her, but you learn more about her and the town as you dig in to her murder.

Will Bella appear in more episodes beyond the first one?
It’s a possibility. We’re talking about it.

Was changing the mask something you knew right away that you wanted to do?
It was many, many conversations over many months, and I think that everyone’s opinion was that in 1996, when we first saw it, [the old mask] was terrifying. But I think once “Scary Movie” took the mask and did their various versions of it, it just wasn’t as impactful as it was originally … We just realized that if we’re reinventing “Scream” for TV, we needed to take the license and create something that had the same shock value that the original did in 1996.

The kills are a big part of the appeal. Do you feel pressure to constantly up the ante?
It’s a challenge we face every day. Because we know there’s a lot of shows out there, and everybody wants to be the topic of conversation at the water cooler and on Twitter at every act break. For us, we knew that we had to make some pretty exciting kills, but we kept going back to: If you love these characters, you don’t want to see them die… Even a simple kill can have as much impact as the craziest one if you care about the character enough and you’re invested. Then the complexity or the gore value of the kill is not as important as “Oh my god, they just killed my favorite character!”

Given that the show is a mystery, how will you keep a lid on spoilers going forward?
That was a big questions at a certain point when we were developing it. Do we want to try to keep it secret that Bella Thorne is the first kill? Do we want to keep the mask a secret until you first see it on the show? But I think the world has changed a little bit … There would’ve been a time when I would’ve been horrified at the thought of them putting the first eight minutes out or revealing that Bella Thorne died … That just gets kids more excited to see what’s coming.