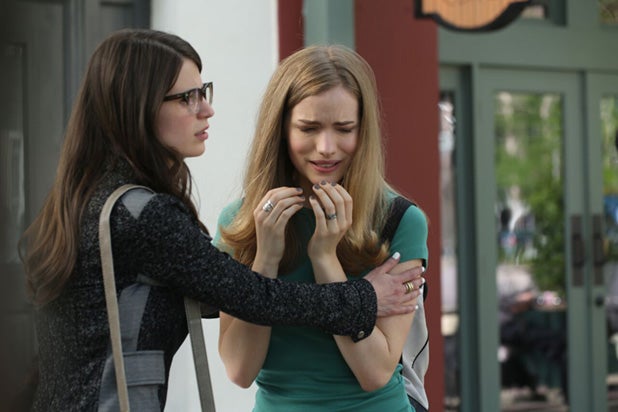 “Scream,” the MTV television adaptation of the slasher-horror film series will conclude its 10-episode first season tonight, two days after the death of the movies’ original director, Wes Craven.

“He, [writer] Kevin Williamson and [executive producer] Bob Weinstein had really shaped these amazing series of movies that people say really rejuvenated the horror genre at a time when it had become very stagnant,” showrunner Jill Blotevogel told TheWrap. “His experience was invaluable in creating the pilot for this show, and in life.”

A tribute to the show’s late executive producer will air during tonight’s finale.

Also Read: How Wes Craven Turned Me Into a Teenage Movie Pirate (Sort Of): An Appreciation

In an interview, Blotevogel talked about her reaction to the famed director’s death, his influence on the series and teased the big reveal of the person behind the Brandon James mask — and how they managed to keep the killer’s identity secret.

What was your reaction to hearing the news of Wes Craven‘s death on Sunday?
Stunned. It was completely unexpected news. We’re just shocked. Wes Craven has influenced me and so many people in the industry. Not just people who make horror, or genre, but storytellers. He was just so good at what he did, and he was such a gentleman whenever you would deal with him.

How would you describe his influence on your work?
He was very open and generous, in terms of claims to properties that he was very emotionally attached to. He, Kevin Williamson and Bob Weinstein had really shaped these amazing series of movies that people say really rejuvenated the horror genre at a time when it had become very stagnant. And I do think the original “Scream” is a great example of a movie that is terrifying and hilarious, which I don’t know that anyone thought was possible.

What kind of feedback have you been getting from fans of the series?
Unlike the “Scream” movies, where you were in your seats for 90 minutes at a time, and you had to let your suspicions twist and turn and change as you were glued to your seat, having a week between episodes has given our series a real sense of community. It’s let people talk about the possibilities and their suspicions and the things that they like, and the things that they’re not as happy with week to week.

As the creator/showrunner, being able to see what people think has been really enlightening. Even though most of the episodes had already been produced by the time they started airing, it’s been an interesting learning experience looking ahead to Season 2. Giving the audience a little more time to process and digest things changes the way you make a horror series.

How long have you known who the killer would be?
At the very beginning we talked about a lot of options, as I think you have to in order to create a great whodunit. And you’ve got to create a bunch of characters who have dark sides and dark moments.

It’s not really something that came up in the casting process of the pilot, because at that point we didn’t really know who the killer was going to be. It was really just getting a sense of the actors.

There were people who were obviously more likely to be the killer because they had a darker role in the pilot, including Kieran [Amadeus Serafini] or Noah [John Karna], but we didn’t know when we were casting. We were just looking for the best actors, and the people who really embodied these characters. We sort of learned along the way.

I. Marlene King said that “Pretty Little Liars” switched back to physical scripts and DVD screeners to keep the identity of “A” under wraps before their finale last month. Did you take any special security measures?
That’s where shooting in Baton Rouge was really helpful. It was isolated and we kind of had our own little world there. We used the name “Hush” for all of our signs and everything.

But we had a cast and a crew that we trusted. They were all so invested in keeping the mystery safe for the audience. We did the standard security thing where everything was strictly guarded, but not even our cast and crew knew who the killer was until the final script was sent out. We were worried, but I think we’ve made it.