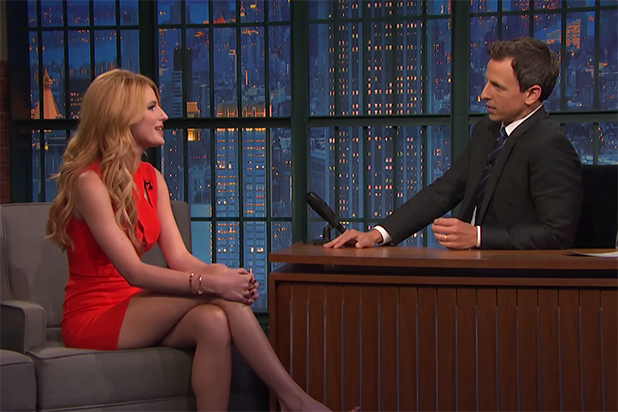 Bella Thorne, one of the stars of “Scream,” MTV’s adaptation of the famous horror franchise, wasn’t even born when the first movie was released in 1996.

On “Late Night With Seth Meyers” on Thursday, the actress revealed that at 17 years old, she missed the first movie by nearly a year.

“I remember when the first Scream film came out, it was really exciting for me,” Meyers said. “A little depressing for me: You were not born when it came out.”

But that didn’t stop Thorne from becoming a fan of the franchise. The former “Shake It Up” star explained that she’s been watching horror films since she was a child, despite her mother’s protests.

“My mother would always literally be like, ‘Bella, you can’t watch horror films, you’re too young.’ But I grew up loving the horror genre,” she said. “Also, I have older siblings.”

As Meyers pointed out, the “Scream” franchise is known for featuring well-known actresses like Drew Barrymore and Jada Pinkett-Smith who don’t survive past the opening minutes. Thorne, a former Disney Channel star, certainly fits that bill.

MTV released the first eight minutes on the horror series on Thursday, and in the clip Thorne doesn’t last long after being targeted by the show’s masked killer.