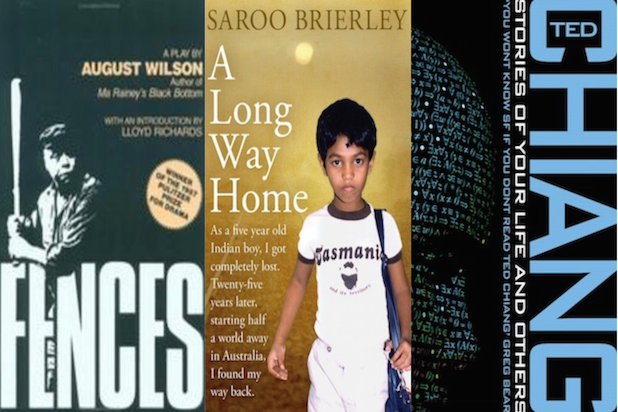 The writers of “Arrival,” “Fences,” “Hidden Figures,” “Lion” and “Moonlight” have been nominated for the USC Libraries Scripter Award, an honor that goes to both the writer of an adapted screenplay and the author of the original work on which the script was based.

The late playwright August Wilson is the sole nominated writer for “Fences,” for which he wrote the screenplay based on his play. In the other cases, the screenwriters adapted the work of another author: Eric Heisserer wrote “Arrival” from the novella “Story of Your Life” by Ted Chiang; Allison Schroeder and Theodore Melfi wrote “Hidden Figures” based on the nonfiction book by Margot Lee Shetterly; Luke Davies wrote the “Lion” screenplay based on Saroo Brierly’s memoir; and Barry Jenkins wrote the screenplay for “Moonlight” from Tarell Alvin McCraney’s unproduced play “In Moonlight Black Boys Look Blue.”

Other screenplays that were eligible for the Scripter Award and will be in the running for the adapted-screenplay Oscar include “Nocturnal Animals,” “Love & Friendship,” “Hacksaw Ridge” and “Silence.”

In television awards, a category in its second year at the Scripter, nominations went to episodes of “Game of Thrones,” “The Man in the High Castle,” “Orange Is the New Black” and “The People v. O.J. Simpson,” and to the miniseries “The Night Manager.”

The nominees were chosen by a jury of writers, filmmakers, journalists and academics.

The Scripter Award has been handed out by USC since 1988, beginning as an idiosyncratic honor with a literary bent. In recent years, though, it has closely paralleled the Oscar race for Best Adapted Screenplay, with the same screenplay winning both awards for the last six years in a row.

Also Read: Why 'Deadpool' Won't Get an Oscar Nomination for Best Picture

Last year, four of the five Scripter nominees went on to receive Oscar nominations in the Best Adapted Screenplay category, with “The Big Short” winning both awards. Over the last 16 years, 50 of the 80 Scripter Award nominees have subsequently received Oscar nominations.

The 2017 USC Libraries Scripter Award ceremony will take place on Feb. 11 in the Edward L. Doheny Jr. Memorial Library on the University of Southern California campus in downtown Los Angeles.

The Scripter finalists in feature film:

Screenwriter Eric Heisserer for “Arrival,” adapted from the novella “Story of Your Life” by Ted Chiang

August Wilson for the play and screenplay of “Fences”

Screenwriters Allison Schroeder and Theodore Melfi for “Hidden Figures,” based on the nonfiction book by Margot Lee Shetterly

Luke Davies for the screenplay for “Lion,” adapted from the nonfiction book “A Long Way Home” by Saroo Brierley

The finalists in television:

Screenwriters David Benioff and D. B. Weiss, for the episode “The Winds of Winter” from “Game of Thrones,” adapted from the fantasy series “A Song of Ice and Fire” by George R. R. Martin

Frank Spotnitz, Erik Oleson, and Joe Kawasaki for the episode “Fallout” from “The Man in the High Castle,” based on the novel by Philip K. Dick

David Farr for the miniseries “The Night Manager,” based on the espionage novel by John le Carré

Tara Herrmann and Jenji Kohan for the episode “Toast Can’t Never Be Bread Again” from “Orange is the New Black,” adapted from the memoir by Piper Kerman, “Orange Is the New Black: My Year in a Women’s Prison”