What started as a quick and quiet in-and-out Cuba visit for Sean Penn has turned into raging political and journalistic debate over the leftist actor’s supposed assignment by Vanity Fair to interview el primo Fidel Castro. 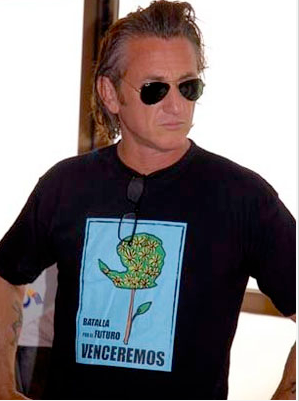 But that’s not the real story.

Vanity Fair didn’t assign anything, and neither did Huffington Post. Sean Penn was only in Cuba for one day this week. He had no plans to interview Fidel Castro.

He’s now back in the States after spending Tuesday in Cuba, then flying to Venezuela on Wednesday, where he met with President Hugo Chavez.

The two discussed the possibility of Penn shooting a film in Venezuela, which was written by Cuban writer Alejo Carpentier and takes place in the jungle along the southern Orinoco River.

We asked Penn’s publicist, Mara Buxbaum, to clarify the point of Penn’s one-nighter in Cuba: “It was a journalistic and creative trip,” she allowed. “He had a letter from Vanity Fair and Huffington Post. Whether there’s a specific story to be assigned or not is still to be determined.”

Methinks he was really there solely to nab the rights to Carpentier’s work, and the letter was a cover. But that’s just me.

The real story is that Hollywood celebrities slip off to Cuba all the time. God only knows why they find the place so compelling. Michael Douglas showed up with Penn this week. Penn himself has been there many times.

Why did we learn of this one? Because the fame-seeking missile Diana Jenkins (below right, on the red carpet with her pet Italian designer, Roberto Cavalli), the latest celebrity shadow and wannabe Hollywood power player, took Sean on her private plane to Havana and let that fact be known in full color on TMZ.

The Jenkinses have paid $500,000 (please count the zeros) to develop a screenplay on a decade-old Vanity Fair story by renowned 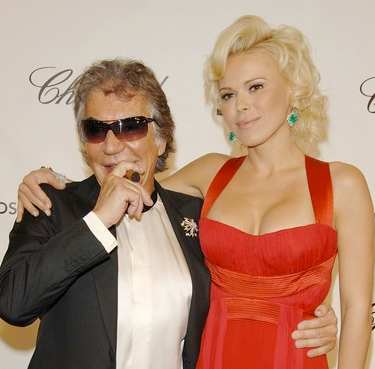 Cuba expert Ann Louise Bardach (who, by the way, has just published her latest Cuba tale of intrigue, “Without Fidel: A Death Foretold in Miami, Havana and Washington”), according to a knowledgeable individual who declined to be identified.

The 1996 story, about Robert Vesco, tells the tale of a financier-tycoon who started out as Fidel’s best friend and ended in jail. (Good yarn: He was sentenced to prison in Cuba for a fradulant financial scheme and wanted in the U.S. for making an illegal contribution to Nixon, bribery, and trying to arrange a deal for American airplanes with Libya. He died of lung cancer in Havana in 2007.)

Still … no one pays that kind of money these days.

Contacted on Thursday, Bardach said she was mystified by Hollywood’s passion for a sad Communist dictatorship with excellent cigars.

“They’re well-intended but misguided, they don’t know what they’re doing,” she said of folks like Penn and Douglas. “They don’t understand that it’s a repressed, authoritarian country. They just think Fidel’s really cool. They drank the Kool-Aid.”