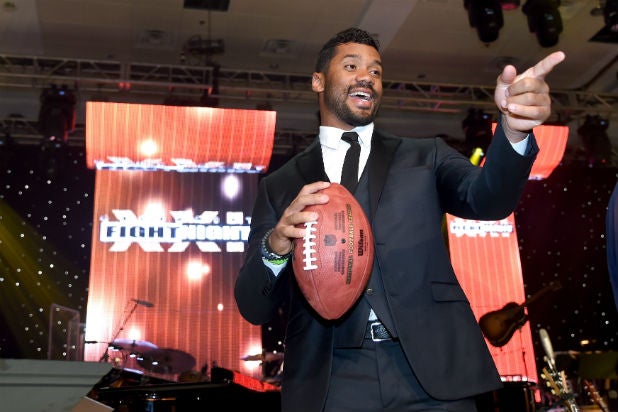 After playing in the Super Bowl for the second year in a row, Seattle Seahawks quarterback Russell Wilson will host Nickelodeon’s “Nickelodeon’s Kids’ Choice Sports 2015” awards on Thursday, July 16.

The NFL player takes the reins from last year’s host, Michael Strahan, who will continue to serve as executive producer for the second annual event at UCLA’s Pauley Pavilion in Los Angeles, which features Hollywood stars, the world’s best athletes and plenty of slime.

“I’ve always wanted to host a show… I’ve never hosted anything like this before but I’ve played in front of a lot of people so I’m not nervous,” the 2013 Super Bowl champion told TheWrap on Wednesday. “It’s all about authenticity and enjoying yourself — and it’s all about the kids.

“I brought my sister last year and had a blast, so this time I am the ‘King of Slime’ and I get to host the show,” said Wilson, who also has a cameo in the upcoming “Entourage” movie.

Also Read: Inside the Super Bowl: 9 Things You Didn't See on TV

While he can’t reveal who will attend this year, Wilson is hoping he gets to slime New York Yankees legend Derek Jeter, and reap revenge on a certain New England Patriots player, whose interception at the end of Super Bowl XLIX dashed Wilson’s dreams of a second championship ring. “I would like to slime Malcolm Butler to get him back,” he said.

He was also voted favorite newcomer at the 2014 “Kids’ Choice Sports” awards and is recognized for his charitable work including weekly visits to Seattle Children’s Hospital.

Asked why Wilson was asked to take over from Strahan, Jay Schmalholz, SVP of live events for Nickelodeon told TheWrap: “He is just so relevant now — he is really a big kid at heart, is known by kids and is a great role model,” he said.

“Nickelodeon’s Kids’ Choice Sports 2015” is produced by Done + Dusted in association with Nickelodeon Productions. Jay Schmalholz and Shelly Sumpter Gillyard are executive producers. Constance Schwartz and Michael Strahan of SMAC Entertainment will serve as co-executive producers, alongside Ian Stewart and Hamish Hamilton of Done + Dusted with Hamilton also serving as director of the show.