In this blog, I’m reaching out to you, dear reader, to help prevent a tragedy.

The symptom of the new and paranoid ‘lockdown’ mindset of the MPTF is about to result in an accident that we can prevent. The seemingly arrogant assurances of MPTF COO Seth Ellis have fallen flat as you will read and see, and show an apparent lack of regard for the safety of the most fragile residents.

During a visit with my mother last weekend at the Motion Picture Home, I personally experienced this symptom of security-gone-wild that has transformed the property needlessly into a virtual gulag. Gaining entrance to Area 51 might be easier than what I experienced this weekend. 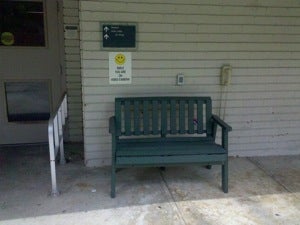 The sun had broken through the clouds, and I thought I’d chance a nice stroll ‘n roll in the fresh spring air with mom. She loves the smells of spring — the fresh cut grass and the flowers. I bundled her up in a sweater and trekked down the main hallway to exit out back. The doors had been shut down, no hydraulics assisting in their opening.

(At left: Main access door to LTC with unmarked, useless phone. Would appearances be this shabby under Lew Wasserman’s regime?  Does this phone look accessible to someone in a wheelchair?)

Given my girth and a little momentum, I was able to force the doors open and get outside by slamming my prodigious backside into the doors and wheeling my mom out into the fresh air.

After a few minutes, my mother, who suffers from dementia but can still make her needs known, very loudly started yelling "Too Cold!!! Too Cold!!!"

I know at that time it would be best to quickly get her back into the warmth of the facility, and maybe try another day when the weather was warmer. I added my sweater to the one she was wearing and headed back.

The doors were locked.

Not only were the main doors locked, the doors to the Schaeffer wing were locked, the doors from the patios were locked, every door was locked. I had to wheel my mom down a narrow road at the west end of the property, past the ‘no access’ signs, hoping that a car didn’t come careening around the corner, through the busy parking lot, around a blind corner, and into the front Skirball center entrance.

I was pissed and spitting nails. I demanded to talk to the administrator on duty. They brought a nurse in, as nobody above her rank was anywhere to be found on the property. She attempted to deliver the corporate line on security. I wasn’t buying it. I demanded to speak with the administrator on call. The only person on-call for the weekend was MPTF COO Seth Ellis. The nurse at first refused to call him, then decided that putting me in touch with him would be a good idea.

Seth brushed off my concerns and advised me that there was a phone right at the back door. All I had to do was pick it up and ask the attendant to open the door. Making sure my mom was warm and safe back in the LTC, I asked the nurse to accompany me back to where the phone was.

Again, opening the doors required both fortitude and a bit of muscle. The double doors closed behind us, and this time I heard an audible click as they locked. We looked for the phone, and finally, found it.

No signage, nothing saying to pick it up if you can’t get in. You can see by the photo above that anyone in a wheelchair might find it difficult position themselves close enough to the phone to use it, even if they knew what it was for. They would have to move the bench.

I picked up the phone. After about 10 rings, the woman who answered it said "Emergency." I asked her if she could open the back doors. She seemed surprised by this request and said, "No, I’m sorry, I can’t do that."

Trying to alleviate my frustration, the nurse advised me that there was an unmarked route to get back into the LTC, and then took me back in through a dark labyrinth looking route that reminded me of the walk that Morgan Freeman took as the U.S. President to escape the humanity ending asteroid that was about to obliterate mankind.

Imagine how frightening and daunting this route would be to an elderly resident on their own, locked out of their home. There was no way that anyone would know that this was the way to get back into the facility.

Seth Ellis’ answer to this? "I’m sorry, I’ll have to re-train them — anyway, it’s only like this on weekends. Please don’t call me again."

His arrogance was not only appalling, it was sad. We need to ask ourselves, what security requirements are so stringent so as to deny access in and out of a nursing home? What security risks are there on weekends that aren’t there during the week?

We need to ask ourselves: What tragedy is waiting in the wings if we don’t act now. The possibility of a resident caught outside unable to gain entry needs to be measured against whatever weekend security fears they might have.

How many residents are denied the healthy access to the outdoors that is a basic freedom on any given weekend? What is the purpose in denying this freedom? What security concerns trump a family’s right to easy access. How many elderly partners are without the strength to open the all but barred doors to get their loved ones out in the fresh air? How many are not able to walk the distance to get back in?

How do they expect a wheelchair-bound resident to call for help using an unmarked phone positioned so as not to be accessible? What are they telling us?

What are they telling the motion picture and television industry? What is the concern over security anyway? This is a nursing home, not an airport. This is a health facility, not a prison.

This is our facility.

Please join me in raising holy hell about this. I will be calling Seth Ellis again to demand that these restrictions be lifted. I ask that you do that as well, and voice your disgust at the denial of rights to the disabled, and the disregard of the elderly and their families.