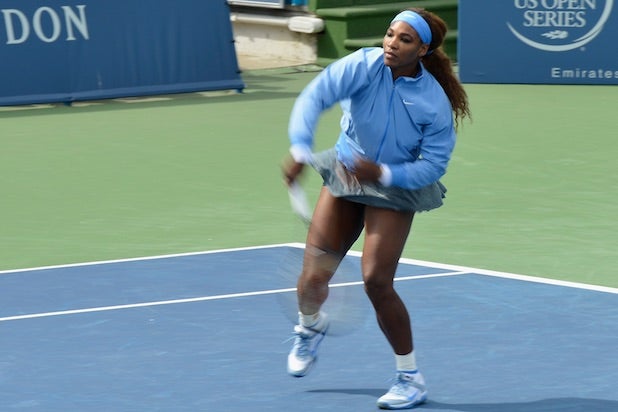 What began as two buddies out for a friendly game of late-night tennis ended up as a once in a lifetime match with the queen of the court: Serena Williams.

Williams and her trusty Yorkie, Chip, were out for a walk Sunday night when she spotted two guys enjoying a casual game of tennis. “I’m thinking about asking these guys if I could hit, just to see their reaction,” she laughed as she told her friend, who captured the moment on video.

“I’m going to ask if I can have the winner,” she said quietly, but she was spotted. “I think I heard them say my name already. Dang it.”

The guys couldn’t believe their eyes as Williams approached. “Oh my goodness. Is this for real?” one of them asked.

Yep. “I don’t have on my Nikes, but these will work,” she said lacing up while Chip ran around the court.

After she hit around the ball with the guys, let’s just say, the 23 Grand Slam singles title-holder was still undefeated.

“The moral of this story is,” she said, “you never know when I could be coming to a tennis court near you.”

Check out the action below.

.@SerenaWilliams surprised two random fans by playing them in tennis and put it on Snapchat! pic.twitter.com/Jo9i83icqR