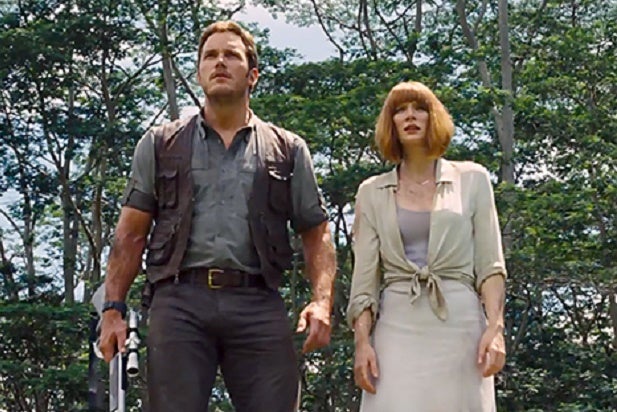 The blockbuster “Jurassic World” stomped to $54.2 million and just edged Pixar Animation’s “Inside Out” for its third straight box office triumph this weekend. In the process, the dinosaurs took a big bite out of Seth MacFarlane‘s “Ted 2,” which debuted with a muted $32.9 million. “Max,” the family film about a heroic war dog, opened to a better-than-expected $12 million for Warner Bros. and MGM .

“Ted 2,” the R-rated sequel to the 2012 comedy hit featuring the trash-talking bear, had been expected to make history by hitting $50 million along with “Jurassic World” and “Inside Out,” which took in $52.2 million. It would have been the first time three movies had managed the feat on the same weekend.

But “Ted 2,” starring Mark Wahlberg and Amanda Seyfried, came in more than $15 million under projections for Universal and Media Rights Capital, hurt by weak reviews and giant dinosaurs that swallowed up its target young male audience. This makes it two misfires in a row for MacFarlane, who directed, co-wrote and provided the voice for the talking bear in both “Ted” movies. His latest miss follows last year’s disappointing “A Million Ways to Die in the West.”

It was a roller-coaster weekend for Universal, which saw its string of strong 2015 openings come to a halt with the tepid “Ted 2” debut, but will also watch “Jurassic World” top $500 million in record time at the domestic box office Sunday and build on its lead as the year’s highest-grossing movie. “Jurassic World” was also the No. 1 film in the world for the third weekend in a row and, after adding $82.5 million from overseas, it’s foreign total is $738 million and its global haul is a whopping $1.23 billion.

The studio had good reason to expect more from “Ted 2,” since the original opened to $54 million in June of 2012. “Ted” became a pop culture sensation that summer, took in $550 million at the box office globally and became the year’s top-selling comedy on DVD and Blu-Ray.

The mediocre launch for “Ted 2” is made worse by the fact that its production budget was $85 million, about $35 million greater than the original film’s $50 million. MacFarlane produced the live action/CG-animated comedy alongside Bluegrass Films’ Scott Stuber, as well as Jason Clark and John Jacobs, all returning from the original.

“Ted” writers Alec Sulkin and Wellesley Wild also returned to join MacFarlane, but the concept of a foul-mouthed teddy wasn’t as fresh and the sequel hasn’t been a hit with critics. It’s at 46 percent positive on Rotten Tomatoes, compared to the original film’s 67 percent.

It received a “B+” CinemaScore from audiences, which were evenly split age-wise with 49 percent under 25 and skewed male at 59 percent. The PG-13-rated “Jurassic World,” the PG “Inside Out” and PG-rated “Max” were all able to attract families. But the raunchy “Ted 2” was positioned as a counter-play to the family fare and couldn’t take full advantage, in part because of its R rating, which kept kids away.

Disney’s “Inside Out,” came up short in its bid to derail the dinosaurs for the second straight weekend, but impressed again in the process. It dropped just 42 percent from its $91 million debut, which was the best-ever for a runner-up film and the best ever by an original movie.

Writer-director Pete Docter’s well-reviewed family film is up to $185 million domestically and, after adding $81.5 million from abroad this weekend, its worldwide total is $266 million after two weeks.

“Max,” the weekend’s other wide opening film, beat out “Spy,” the holdover R-rated comedy from Fox, for fourth place. The tale of a military dog that returns from Afghanistan following his master’s death and lives with the fallen Marine’s family, received an “A” CinemaScore from audiences. That’s even better than the critics, who have it at 69 percent positive on Rotten Tomatoes.

The $7.8 million taken in by “Spy” puts the comedy directed by Paul Feig and starring Melissa McCarthy at $88 million domestically after a month in release. By comparison, “Bridesmaids” was at $107 million and “The Heat” had taken in $129 million at the same point. Those two similarly R-rated Feig-McCarthy comedies went on to $169 million and $159 million domestic totals in 2011 and 2013, respectively.

The weekend will be up around 3 percent from the same frame a year ago when “Transformers: Age of Extinction” opened with a massive $100 million. That keeps 2015, which is running seven percent ahead of last year, on pace to be the biggest year ever at the domestic box office.