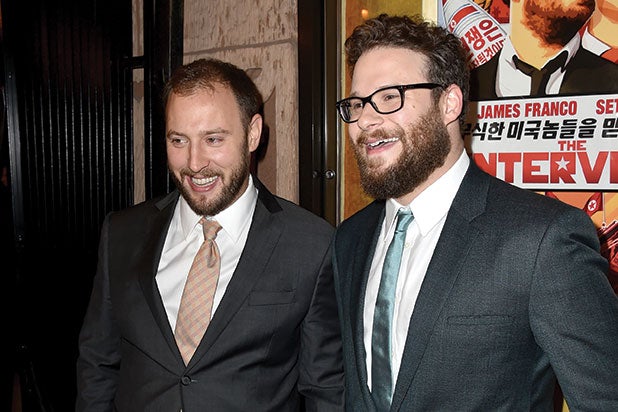 Seth Rogen and Evan Goldberg’s Point Grey Pictures (PG), along with partner James Weaver, have partnered with Lionsgate to produce multi-platform content, the studio announced during its CinemaCon presentation to exhibitors Thursday.

PGP will continue to operate autonomously under Rogen, Goldberg and Weaver’s leadership, but will work closely with Lionsgate’s executive teams to develop content for its movie, scripted and unscripted TV, digital and location-based entertainment businesses.

PGP is also behind the Rogen and Charlize Theron rom-com “Long Shot,” arriving from Lionsgate this summer. The film won the Audience Award from the Headliners section of SXSW and opens on May 3.

“Lionsgate is a leader in entertainment with few equals,” Rogen, Goldberg and Weaver said in a statement. “Over the years we have developed some of our biggest hits with Joe Drake and Nathan Kahane — they have been among our biggest supporters. We are thrilled to be partnering with them, alongside Kevin Beggs in TV, and the entire Lionsgate team.”

“Seth, Evan and James are visionary entrepreneurs and three of the greatest storytellers in the business,” Lionsgate CEO Jon Feltheimer said in a statement. “We look forward to a partnership that turbocharges the continued ramp up of our film and television slates while creating exciting opportunities across our entire portfolio of businesses. Our investment in the Point Grey team promises great returns for our two companies, our partners, and audiences around the world.”

“From our days at Mandate and Good Universe to our experience working with them here at Lionsgate, we have had the pleasure and privilege of working with Seth, Evan and James on some of their most iconic films and we could not ask for more incredible or collaborative creative partners,” Lionsgate motion picture group chairman Joe Drake said in a statement. “We believe the best from Point Grey is yet to come. The partnership we’re announcing today is an organic expansion of our relationship with these talented creators. In addition to the outstanding comedies that have been the hallmark of Point Grey, we are equally excited to see this company continue to push creative boundaries and develop dramatic material as well.  As they move in diverse directions artistically, we look forward to continuing to build our businesses together.”

Drake and Kahane’s relationship with the Point Grey team has included collaboration on “Neighbors,” “This Is The End,” and “The Night Before,” as well as the dramedy “50/50,” “The Disaster Artist” and “Blockers,” among others. They had an overall deal with Point Grey at their production and distribution company Good Universe, which was acquired by Lionsgate in 2017.