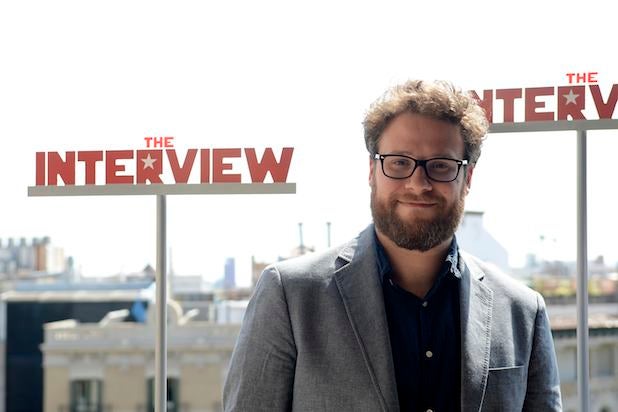 Seth Rogen attempted, again, to clear up the outrage surrounding a tweet about “American Sniper,” which he stated reminded him of a scene in Quentin Tarantino‘s World War II movie “Inglorious Basterds.”

“I truly hope this clears things up,” Rogen tweeted on Thursday with a longer message in response to a number of people — including Whoopi Goldberg, Blake Shelton, Kid Rock, Dean Cain and country singer Craig Morgan — who interpreted it as an insult to “American Sniper” Chris Kyle.

“My grandfather was a veteran. My comment about the movie was not meant to have any political implications. Any political meaning was ascribed to my comment by news commentary,” Rogen wrote. “I’m sorry if this somehow offended anyone, but that was not my intention.”

Here’s Rogen’s original tweet, which he has now explained twice that he was not comparing the Oscar-nominated Clint Eastwood drama starring Bradley Cooper to Nazi propaganda, but it simply “kind of reminds” him of a fictional piece of war propaganda, called “Nations Pride,” Tarantino created for “Basterds.”

Also read: Why ‘American Sniper’ Is a Coming Out Party for Patriotism (Guest Blog)

American Sniper kind of reminds me of the movie that’s showing in the third act of Inglorious Basterds.

Kid Rock, a self-described “American Badass,” was so enraged by Rogen’s tweet that he wrote on his website “The Interview” star deserves to “catch a fist to the face soon,” and opined Rogen “was probably molested by his uncle.”

“And what’s super weird is that Kid Rock IS my uncle,” Rogen tweeted after issuing his apology.

A number of  outlets told their readers Rogen “slammed” the blockbuster Iraq war movie,  or “compared” it to Nazi propaganda. Perhaps the most sensational was Breitbart’s take: “Seth Rogen: ‘American Sniper’ Is Equivalent to Nazism,” the conservative blog’s headline reads in a Google search, while the post’s headline currently reads, “Seth Rogen: ‘American Sniper’ Is Equal to Nazi Propaganda.”