Debauchery and sin have returned to New York City’s Meatpacking District — and not just because so many of the restaurants and clubs have reopened in the area. Playwright-director Moisés Kaufman has organized “Seven Deadly Sins,” an evening of brand-new short plays from some rising-star playwrights that could only be staged in these just-post-pandemic times: in now-empty storefronts in the shadow of the hulking Whitney Museum.

Three times a night, theatergoers are divided into three groups, handed headphones and steered toward a series of outdoor rows of chairs where two actors perform behind glass. The concept for the shows — modern takes on the classic Seven Deadly Sins — is at once inviting and clichéed for a neighborhood known for sex dungeons and other risqué activities in its pre-gentrified days.

And the plays — by a range of notable voices like Thomas Bradshaw, Bess Wohl, Ngozi Anyanwu and Kaufman himself — are a decidedly mixed bag, though each gets a polished production with striking scenic design (by David Rockwell), costumes (by Dede Ayite) and lighting by Yuki Link under tricky circumstances.

Some of the playwrights take a literal approach to their chosen Sin. Kaufman’s own entry, “All I Want Is Everything,” depicts a greedy sibling (Eric Ulloa) willing to dive into his father’s grave to retrieve a Rolex watch. Thomas Bradshaw’s Sloth-inspired “Hard” imagines a grown-up gamer (Brandon J. Ellis) who ignores his wife’s sexual advances and even wears a diaper to prolong his uninterrupted playtime. And Jeffrey LaHoste’s Versailles-set look at Envy imagines an exchange between the past-her-prime Princess Charlotte (Caitlin O’Connell) and her husband’s twinky gay lover (Andrew Keenan-Bolger).

But the standouts take the classic Sin as a jumping-off point to explore other ideas: Ngozi Anyanwu reimagines Gluttony as Eve’s overconsumption of knowledge after a temptation by a wise-cracking Devil in the Garden of Eden, while MJ Kaufman’s “Wild Pride” explores how the word has become both a virtue and a curse, particularly for the LGBTQ+ community. Cody Sloan plays a young trans YouTube influencer whose obsession with views and likes — and with always presenting a glossy it-gets-better attitude in the face of darker truths about the path to acceptance — leads to his undoing.

The highlight of the evening comes from the inimitable Bess Wohl, whose self-titled take on Lust is an absolute gem that makes the most of the constraints and the possibilities of this unique theatrical experience. We hear the inner thoughts of an exotic dancer as she performs her routine on the pole — her grocery list, as well as her recollections of a bad encounter with a client who has just walked back in the club. As the lithe dancer, who delivers an incredibly acrobatic routine for nine different groups of theatergoers each night, Donna Carnow is astonishing.

And she’s not just getting a workout with her dance routine, but conveying through her every expression and movement the reality of her character’s plight, her pain and her humanity. This is a peep-show performance you won’t soon forget. 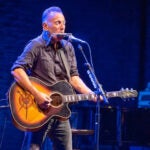