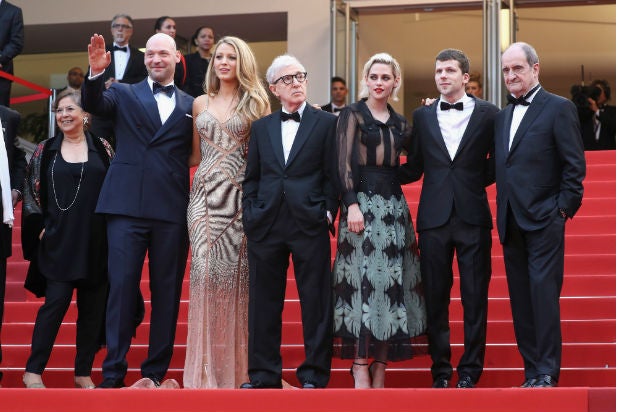 It’s almost irresistible to think of a film festival’s first weekend as the halfway point and thus far the 2016 Cannes Film Festival has offered up great performances, a lot of skin and a fair amount of sex – but no real conclusions.

This year’s screenings spread out across 10 days that began on Thursday and end next Saturday (with opening night on Wednesday and closing night next Sunday), the Sunday-night cutoff feels more arbitrary than ever.

Still, we’ve learned a few things so far. For instance:

As usual, some have grumbled about how it’s been a lackluster first few days on the Croisette, and they’re right … except that “Toni Erdmann” excited lots of people, and “American Honey” excited some and offended others, and smaller films like “Mean Dreams” and “Paterson” have picked up strong buzz.

As for big themes in the first few days of the 2016 Cannes Film Festival, here are five.

LOOOOONG MOVIES
When asked about the proper length for a man’s legs, Abraham Lincoln once famously said (or was reputed to have said) that they should be long enough to reach from his waist to the ground. Going by the cinematic version of Abe’s rule, a film should be long enough to last from its beginning to its end – and in the view of many of the directors who have brought films to Cannes this year, that can be a long time.

Of the nine competition films that have screened so far, four are longer than two hours and 25 minutes and three top 2:40. The talky Romanian drama “Sieranevada” lasts for 2:53, Park Chan-hook’s “The Handmaiden” has two hours and 25 minutes of stylish sex and intrigue, and Maren Ade and Andrea Arnold both came up with films that meandered for 2:42 in “Toni Erdmann” and “American Honey,” respectively.

Excessive length can be fine: In the case of “Toni Erdmann,” I thought it gave the film’s character studies room to breathe, and the film felt far shorter than its running time. Or it can be distracting, as I felt it was in the interminably episodic “American Honey.”

Still, most of Cannes’ marathon films were frontloaded into the first few days: Of the dozen films left to screen in the main competition, six are longer than two hours but the longest, Kleber Mendonca Filho’s “Aquarius,” is only 2:20. So maybe 2:40 isn’t the new 2:00 after all.

NERVE
While the Cannes programmers have often been accused of playing it safe by consistently selecting the same directors, it’s hard to accuse any of this year’s directors of playing it safe. Good or bad, film after film at this year’s festival has been bold, audacious and even a little nuts. Many of the directors have risked having their movies collapse in a messy heap because they’re trying to cram in so much stuff.

“Slack Bay,” “Staying Vertical,” “The Handmaiden,” “Toni Erdmann,” “American Honey” – with a few exceptions, this year’s competition films have been a collection of over-the-top extravaganzas, not just in length but in subject matter and directorial approach.

And outside the main competition, there’s the movie about the urban teen so obsessed with vampires that his idea of a first date is inviting a girl to his room to watch YouTube slaughterhouse videos (“The Transfiguration”), and the Shiva stoner comedy (“One Week and a Day”) and a variety of others.

And then there’s Jim Jarmusch‘s “Paterson,” which qualifies as one of the most audacious films at the festival because it’s such a small, understated slice of a quiet life in which very little happens. Late in the movie, the bus driver (and amateur poet) played by Adam Driver talks about only remembering a single line of a song and not needing the rest – and that’s what Jarmusch gives us, a single perfect line in the midst of a festival in which most other directors want to supply the whole song, the drum and guitar solos, the false ending and the reprise.

SKIN
Some 6,000 miles from MPAA headquarters, of course there’s a lot more sex on screen at Cannes than there is in the local U.S. multiplex. This year, though, has seemed particularly fertile in that area so far.

“Toni Erdmann” has a very long, very funny nude scene (but it’s distinctly non-sexual). “Staying Vertical” has several graphic sex scenes both straight and gay, including a particularly memorable one very near the end of the film. Park Chan-wook‘s “The Handmaiden” is awash in stylized, over-the-top sex and kinkiness. The kids in “American Honey” do lots of coupling, even though Shia LaBeouf insisted at the film’s press conference that he doesn’t think his scenes of bare-bottomed thrusting had much to do with sex. Marion Cotillard‘s “From the Land of the Moon” might be a period movie set in the 1950s, but it’s all about female sexuality.

GREAT ACTING
Really, you could call a halt to the Cannes acting competition right now, give the best actor award to Dave Johns from “I, Daniel Blake” and the best actress prize to Sandra Hüller from “Toni Erdmann,” and I wouldn’t complain. I also think those two stand a pretty good chance of winning, and if they do I doubt many others would complain.

But there’s also been Adam Driver‘s exquisitely subtle performance in “Paterson,” and Johns’ co-star Hayley Squires in “Daniel Blake,” and Cotillard in “From the Land of the Moon.” And yes, there are lots of more films to come with potentially terrific and awards-worthy performances. So let’s just say that on that particular front, Cannes has gotten off to a very good start.

EXPECTATIONS
Even with the highlights and hotspots I’ve mentioned so far, the first weekend of this year’s Cannes has fostered a sense that we’re all biding our time, waiting for the really great things to come.

We don’t yet know what the jury led by the singular director George Miller is thinking, what the buyers are thinking, what the movie fans will eventually think. But even at the end of a pretty good and very interesting first few days on the Croisette, the best is probably yet to come. Stay tuned.