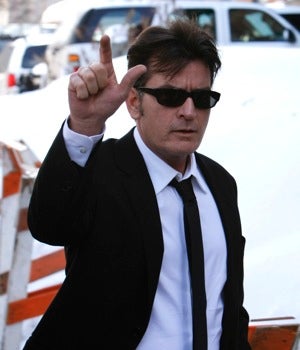 Charlie Sheen is entering rehab and will take a break from the hit CBS comedy "Two and a Half Men," which is shutting down production while he’s in treatment.

"As a preventative measure, Charlie Sheen has entered a rehabilitation facility," Stan Rosenfeld, Sheen’s publicist, said in a statement Tuesday. "He will take some time off his series ‘Two and a Half Men.’ He has asked that his privacy be honored. No further statements are planned."

It was not immediately clear how Sheen’s absence would affect the show’s schedule. The half-hour comedy was in production this week on the 19th episode of its 23-episode run; but like most shows, "Two and a Half Men" is in reruns while the Olympics are on NBC. It could conceivably have enough material banked to hold it over while the actor goes through treatment.

In a joint statement from CBS entertainment head Nina Tassler, Warners TV president Peter Roth and Chuck Lorre, "Two and a Half Men" executive producer, said they support their star.

“CBS, Warner Bros. Television and Chuck Lorre support Charlie Sheen in his decision today to begin voluntary in-patient care at a treatment center," the statement said. "We wish him nothing but the best as he deals with this personal matter. Production on ‘Two and a Half Men’ will be temporarily suspended.”

Sheen’s wife, Brooke Mueller, also went to rehab in the weeks after a Christmas domestic incident at their Apen home. But Mueller left the Malibu Center this weekend after someone on the staff leaked her medical information; her reps said her treatment was ongoing.
Sheen was charged earlier this month with three counts, including felony menacing and two misdemeanors — third degree assault and criminal mischief. He is due in an Aspen court on March 15.
Sheen has had several stints in rehab dating back to 1990, including a court-ordered treatment and detox program following an overdose that required hospitalization.
After the December arrest, Sheen’s co-star John Cryer told People magazine that Sheen was doing well, but was visibly under strain.
"He was in his usual good humor on read-through day," Cryer said, "but obviously with the weight of something hanging on him a bit."
Averaging 15 million viewers this season, "Two and a Half Men" is the most-watched sitcom on TV, according to Nielsen. The Christmas incident had no noticeable effect on the ratings for the show, which has two years left on its renewal order from CBS.
Sheen’s absence could have a wider impact than just the 9 p.m. slot on Monday nights — if he’s gone long enough to disrupt the episode order, it’s possible that it could affect a settlement between Warner Bros., which produces the show, and CBS.
The network was sued in 2008 by Warners, which claimed CBS had failed to pay off production deficits to the tune of $49 million. CBS settled that action by renewing “Men” for three more seasons in a deal that included multiyear pickup of “Big Bang Theory."
Whether an inability by Warner Bros. to deliver on its full slate of "Men" episodes would upend the settlement was not immediately clear.