Update: My colleague David Gill writes in to observe that Greece has not, in fact, ruled out legal action against Shelby White, despite the return of these pieces. See his link in Comments on the reconstruction of the fragmented tombstone. 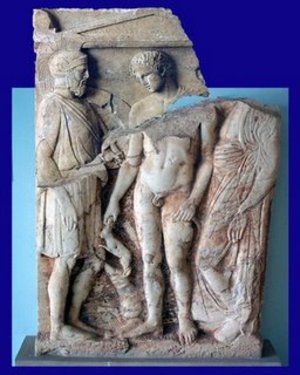 (Photo is a composite of the two pieces, with thanks to Gill.)

Shelby White, the New York-based art collector and donor, has returned two pieces from her private collection to Greece, Reuters reports. This is in addition to items White has already returned to Italy, and which puts her out of further legal jeopardy.

The items, a bronze vase from the fourth-century B.C. and the upper part of a marble tombstone, have been put on display at the National Archaeological Museum in Athens. The tombstone will eventually be reunited with a lower fragment, which is housed at the Museum of Vravrona, meaning the tombstone can be exhibited as a whole for the first time. No word on how this monument came to be dismantled in the first place.