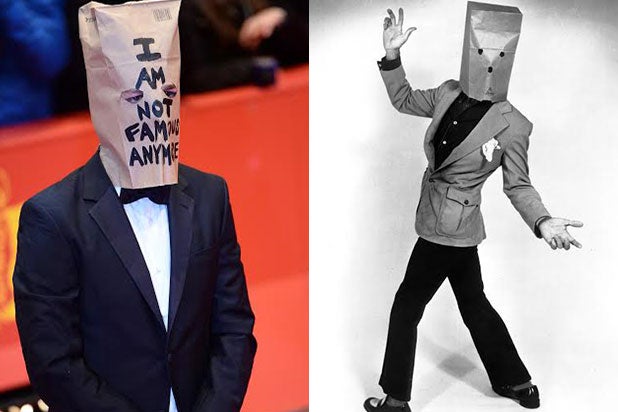 Apparently, Shia LaBeouf wouldn’t know an original idea if it bit him on his smug nose. Even if it had to gnaw through a paper bag to bite him on said nose.

The “Eagle Eye” star made headlines over the weekend when he showed up on the red carpet for the Berlin premiere of “‘Nymphomaniac Volume I (Long Version)” with a paper bag over his head.

It was a striking look, but certainly not his own.

As fans of bizarre 1970s TV offering “The Gong Show” will recall, paper-bag chic was rocked to great effect by a mysterious comedian who went by the name The Unknown Comic. Who, in addition to working the look before and better than LaBeouf, had the added benefit of actually amusing people with his shenanigans.

TheWrap has reached out to Murray Langston, the man behind the Unknown Comic persona, but has not received word back from Langston.

LaBeouf has recently developed a reputation for having sticky fingers in the idea department. After it was pointed out that LaBeouf’s “HowardCantour.com” project bore a striking resemblance to the Daniel Clowes comic book “Justin M. Damiano.” LaBeouf issued an apology. But then was caught with his hand in the idea jar once again, apologizing to “Girls” star Lena Dunham after she made fun of his sky-written apology to Clowes — by quoting Dunham.

LaBeouf was even caught quote-pilfering during the “Nymphomaniac” premiere, quoting French soccer star Eric Cantona before bailing on a press conference.

No question: When it comes to “borrowing” ideas, Shia LaBeouf has got it in the bag.