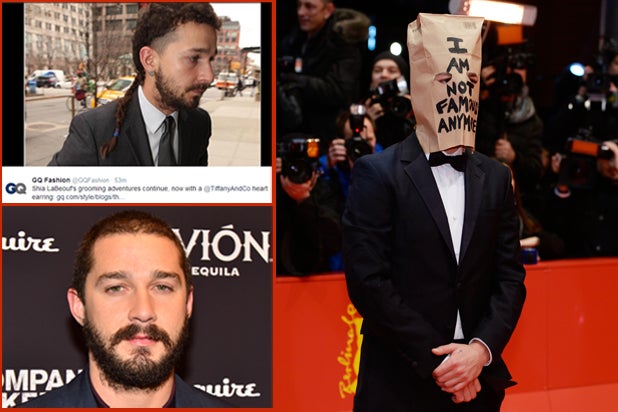 “Transformers” star Shia LaBeouf got some good news and bad news on Friday.

First, the good news: A judge in Manhattan Criminal Court has informed the 28-year-old actor that, if he keeps his nose clean and manages not to get arrested over the next six months, his disorderly conduct case will be dismissed and sealed, USA Today reports.

LaBeouf was in court due to his June 24, 2014, arrest outside of a  performance of “Cabaret.” According to previous reports, LaBeouf was arrested for “refusing to leave a theatrical performance when asked, for creating unreasonable noise and using obscene language outside of Studio 54, and for spitting at a police officer at the Midtown North police precinct.”

In September, the actor reached a plea agreement in the case, agreeing to a three-month alcohol treatment program.

Unfortunately for the actor, even as he works to clear his record in the court system, the press seems intent on convicting him of fashion crimes in the court of public opinion. GQ, for one, weighed in on his appearance (personal, not court), which included a rat-tail hairstyle, scruffy facial hair and an earring.

Also Read: Shia’s 5 LaBeouf-iest Interview Revelations: My Whole Goal Was to Intimidate the F-ck Out of Alec Baldwin

“[T]he hair is showing no signs of normalizing. It defies all kinds of logic, it’s shaved, braided, rat-tailed, overgrown, and bearded all at once,” the publication mused. “It’s a wonder, really. It’s omnigrooming. Mystifying as his routine may be, even his impeccable suit can’t make it work.”

Would the look maybe work better with an orange jumpsuit?