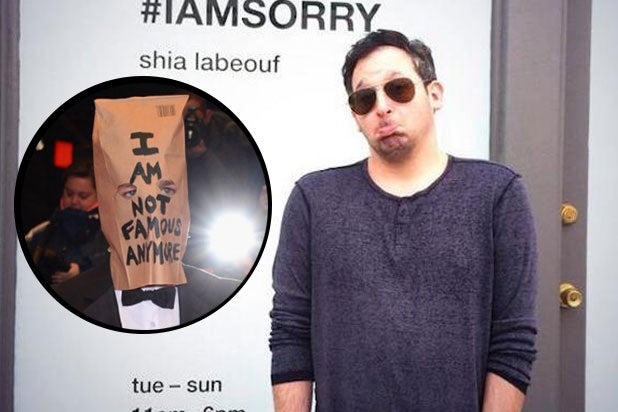 Controversial plagiarist and very famous actor Shia LaBeouf has invited the public to personally witness his latest bizarre performance piece — this one titled #IAmSorry, in which he sits silently at a table with the infamous “I Am Not Famous Anymore” bag over his head while visitors stream in and out.

The “show,” a collaboration between LaBeouf and artists Nastja Sade Ronkko and Luke Turner, runs Tuesday through Sunday from 11 a.m. to 6 p.m at 7354 Beverly Blvd. in Los Angeles.

Given five minutes alone in a room with Shia LaBeouf, what would you say to him? What might he say to you?

The answer to the latter question is, literally, nothing. But the first question is more complicated. Here is a one-sided Q&A between TheWrap’s film reporter Jeff Sneider and international superstar and rumored cannibal Shia LaBeouf.

After standing outside in line for approximately 45 minutes, I alone am ushered past a security guard and inside an art gallery where a young woman has been expecting me.

A table is littered with props including a Daniel Clowes book, “The Death-Ray,” a bowl of Hershey kisses, a pair of pliers, a bottle of cologne, a bottle of Jack Daniels, a pink ukulele, a bullwhip and some other stuff.

JS: Just one? It’s so hard to choose!

Naturally, I choose the whip, since I self-identify as a fellow bad boy. Whip in hand, I pull back the curtain and enter the next room, where a tuxedo-clad man with a familiar-looking bag over his head waits for me in monk-like silence.

Shia doesn’t say anything, but he’s obviously quite pleased to see me as well, since I am among his favorite journalists, or so I’ve come to mistakenly believe over the years. There seems to be a faint glint of recognition in his movie star eyes, which appear teary and possibly bloodshot — not unexpected considering he recently took a plane from Berlin and is probably exhausted, plus he’s still wearing a (likely uncomfortable) tuxedo and breathing through a paper bag. Also, a journalist from Vulture apparently made him cry earlier, so there’s that.

JS: I sense a smile under there. Are you doing “The Raid” remake? I heard they like you and director Patrick Hughes (“The Expendables 3”).

Shia doesn’t say anything, though he seems surprised that I knew Screen Gems was at one point interested in him for the lead in the action remake. No clue if that’s still the case, by the way, but being a famously aggressive film reporter, it was my first question. Then empathy kicked in.

JS: I feel bad for Melissa [Kates, Shia’s publicist, who has been more than earning her fee in recent months] to have to deal with all these phone calls.

Shia doesn’t say anything, though I sense that he feels bad for his publicist too, given all he’s put her through over the course of his career. But hey, that’s why publicists get paid the big bucks.

JS: I wish you were talking; we could have a really good interview. If you do want to speak, you should have Melissa get in touch with me after this.

Shia doesn’t say anything, though I think he appreciates the fact that I took precious time out of my day to check out his latest performance piece/art installation in person, which could pay off down the line.

JS: Hey man, I’m a fan. I admire what you’re doing. You look good in that jacket. What are these tattoos? I’m a nail-biter, myself.

Shia doesn’t say anything, though he doesn’t have to. While the cross on his left hand is a form of self-expression, it’s his fairly dirty fingernails that tell me all I need to know. Some are longer than others. One has blood pooling beneath it. His hands appear to be those of a man who creates. They’re not the soft hands I imagine Zac Efron might have.

JS: You’d like me if we ever hung out, Shia, I promise. I’m not like other LA press, those cretins…

Shia doesn’t say anything, nor does he need to verbalize his often contentious relationship with the media, which he antagonizes as often as they provoke him into newsworthy reactions. He’s not talking or allowing video, so clearly he’s not interested in engaging in a thoughtful discussion of what he is sorry for or who he is apologizing to. Is it Daniel Clowes or all of us — his fans?

JS: What a unique little situation we have here. I like my prop! Is this from Indiana Jones?

JS: I did wait outside a long time so I don’t want to rush out of here. “A Guide to Recognizing Your Saints” is my favorite movie of yours.

Shia doesn’t say anything, though his eyes seem to thank me. That movie strikes me as important to LaBeouf. After all, he cast director Dito Monitel in his short film “HowardCantour.com,” which is how this whole thing started in the first place.

JS: I am not famous anymore. We should really deconstruct that word. What does fame mean anymore? What does it mean to be famous today? Am I famous? Certainly not the same way you are.

Shia doesn’t say anything. He’s letting the bag on his head do the talking for him. Does he want to stop being famous? If so, spending seven hours a day in total silence and letting strangers interact with you in an art gallery probably won’t help.

JS: This is so weird, it’s like a confessional in here. It was my 30th birthday yesterday, so, blink once to wish me Happy Birthday.

Shia doesn’t say anything … but he did blink. He was going to have to blink eventually, but it still made my day.

JS: Are you an actual cannibal like that song suggests?

Shia doesn’t say anything because I didn’t actually ask him this. I just wanted a reason to direct readers to this catchy song by Rob Cantor.

JS: I feel bad for all the people waiting out there in line. Good luck in here. I mean, do you break for lunch? What if you have to pee?

Shia doesn’t say anything, but something tells me he has mastered control of his bladder. You’d have to in order to make it through the “Transformers” movies without getting up.

Shia doesn’t say anything, likely because he knows he doesn’t need luck. He’s got the skills to pay the bills, even if he isn’t famous anymore.