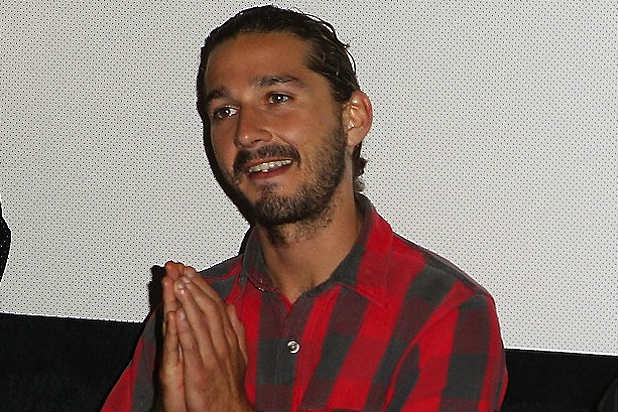 Shia LaBeouf‘s plagiarism case has been taken to the highest public court: Twitter — and now his peers are beginning to make fun of the ridiculous nature of the actor’s multiple offenses and even more numerous apologies.

The most recent stab at making amends saw the “Transformers” actor hyperbolically taking to the skies on New Year’s Day to apologize — again — to cartoonist and screenwriter Daniel Clowes for ripping off his material without proper acknowledgment. LaBeouf, in an attempt to make humorous the grandiose nature of the controversy, hired a sky-writer to mark the Los Angeles air with the temporary, “I Am Sorry Daniel Clowes.”

Now, fellow actors, including Seth Rogen and Patton Oswalt, are mocking LaBeouf via the same method. Rogen posted, “This is by far the most I’ve ever been entertained by Shia LaBeouf.” And Oswalt called LaBeouf “dumb, delusional AND boring” in a tweet.

“Saturday Night Live” writer Chris Kelly (LaBeouf has hosted “SNL” twice, once in 2007 and again in 2008) got in on the fun too, trying to figure out why the “Nymphomaniac” star is hoping to get by extending the discussion.

Here are their tweets:

This is by far the most I've ever been entertained by Shia LaBeouf.

Dear Shia LaBeouf (@thecampaignbook): If you're gonna be that dumb, delusional AND boring when you speak, just go ahead and plagiarize.

Gotta give Shia LaBeouf credit. This is great advertising for…the 10th Anniversary of "Holes" on Blu-Ray?