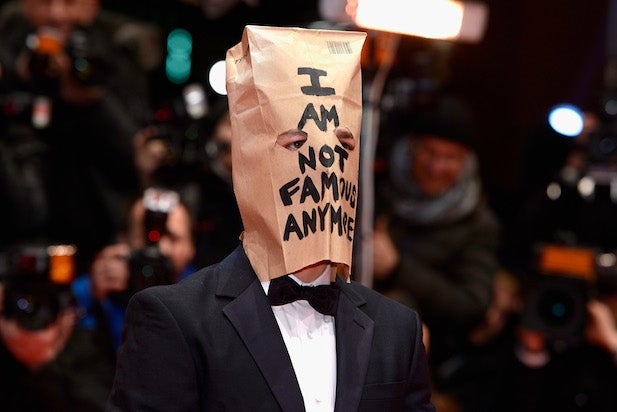 Shia LeBeouf took his fascination with “borrowed” comments to new and inspired heights Sunday, quoting a French soccer star before walking out on a press conference in Berlin for his new film “Nymphomaniac: Volume 1.”

Later, he walked the red carpet in a tuxedo with a paper bag on his head, upon which he’d scrawled his now-catchphrase: “I am not famous anymore.”

The star, making his first formal appearance after finding himself at the center of plagiarism and copyright blowups recently, was on stage with “Nymphomaniac” co-stars Uma Thurman, Christian Slater, Stellan Skarsgard and director Lars von Trier when he was asked about the movie’s sex scenes.

“When the seagulls follow the trawler, it’s because they think sardines will be thrown into the sea,” were the young actor’s only words before he got up and left as the conference ended.  Those were the same words used famously in 1995 by Manchester United footballer Eric Cantona, before he walked out of press session nearly 20 years ago.

It’s unclear what motivated the homage to Cantona, who was known for his enigmatic comments to the press and starred in the 2009 Ken Loach film “Looking For Eric.”

Here’s the video from Berlin:

And here’s the video from Cardona’s press conference.