Legendary has closed a deal with renowned Japanese filmmaker Shinsuke Sato to direct the live-action adaptation of “My Hero Academia (MHA),” the globally acclaimed manga property, Legendary announced on Friday.

Sato is one of the most prolific filmmakers in Japan, having most recently directed the critically acclaimed Japanese hit feature film “Kingdom” in 2019 and Netflix’s “Alice in Borderland” series in 2020. “My Hero Academia” will mark Sato’s English language directorial debut.

“My Hero Academia” has won over audiences worldwide with distinctive characters battling their way through high school in a world where 80% of Earth’s population manifests a super power (or “quirk,” as called in “MHA”). For superhero fanboy Izuku Midoriya, being born without a quirk crushes his dream of going to UA, the superhero academy, and becoming the next All Might – the greatest hero the world has ever known. After a chance encounter with All Might himself, Midoriya vows to work as hard as he can, quirk or no quirk, to become a symbol of peace and a beacon of hope for the world. 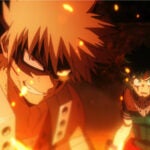 With over 50 million copies in circulation, “My Hero Academia,” written and illustrated by Kohei Horikoshi, is among the most popular manga titles in the world. A part of publisher Shueisha’s Weekly Shōnen Jump since 2014, both the manga and the ongoing anime series from Bones Inc. & Toho Animation are considered among the best of the 2010s.

In 2019, the series won the Harvey award for Best Manga, and the anime series is currently in its fifth season. Two spin-off anime feature films, “My Hero Academia: Two Heroes” in 2018 and “My Hero Academia: Heroes Rising” in 2019, have had some of the most successful box office runs ever for anime titles. A third, “My Hero Academia: World Heroes’ Mission,” was released by Toho on August 6th in Japan.

Tokyo-based filmmaker Sato made waves with his adaptation of Japanese zombie manga “I Am Hero,” which won the SXSW Midnighter Audience award in 2016. After directing the live-action adaptation of “Inuyashiki” in 2018, Sato wrote and directed an adaptation of renowned manga “Bleach” for Warner Brothers Japan. In 2019, Sato wrote and directed the historical war epic “Kingdom” for Sony. Kingdom’s critical and commercial success spawned an in-process sequel, with Sato returning to direct. Sato’s most recent work, writing and directing every episode of the acclaimed Netflix series “Alice in Borderland,” was picked up for a second season just two weeks after season one’s release in December, 2020.

Shinsuke Sato is repped by WME and Grandview in the US and Origamix Partners in Japan.