Over 18 months after NFL player Greg Hardy attacked his ex-girlfriend in a violent assault, police photos of her graphic injuries have finally been made public, and people aren’t happy about them.

As the Dallas Cowboys defensive end prepares to take on the Philadelphia Eagles on Sunday night, Deadspin released shocking images of Nicole Holder with severe bruising over her face, back, arms and feet on Friday — one day after the domestic violence charges against Hardy were expunged from his record.

Soon after the disturbing images hit the web, Twitter exploded with outage from fans. Some are demanding he be dropped by the Cowboys, while others are appealing to the team’s major sponsor, AT&T, to dump their support.

“Greg Hardy should be rotting in a jail cell, instead he’ll wear a star and be cheered,” one Twitter user wrote. “Deadspin story reminds us Cowboys sold their soul to sign Greg Hardy,” said another.

“Hi @ATT I’m calling on you to withdraw sponsorship of @dallascowboys until Greg Hardy is cut. Show that we don’t stand for domestic violence,” a disgusted NFL fan challenged. 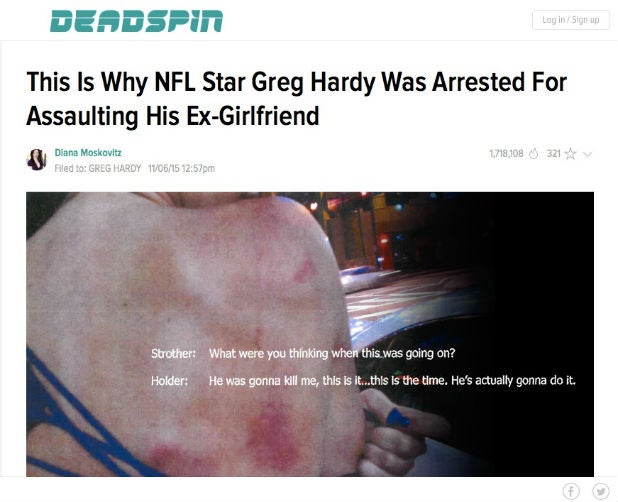 The brutal assault took place in May 2014 when Hardy allegedly threw his then-girlfriend against a tiled bathroom wall and onto a couch covered in assault rifles, strangled her and threatened to kill her.

The sports site owned by Gawker Media also released details of the incident at Hardy’s Charlotte, North Carolina apartment, including that the Holder was choked her until she told him to “kill me so I don’t have to.” She was found by Officer Jeffrey Kendrick running down the street barefoot and crying, according to the police report obtained by Gawker.

Holder later told Detective Faye Strother of the Charlotte-Mecklenburg Police Department that she thought she was going to die. “His pupils were tiny,” she said. “I mean he looked … crazy,” Gawker reported, claiming to have dozens of photos, reports and police documents.

Hardy was convicted by a judge, but his case never went before a jury on appeal because prosecutors said the victim had reached a settlement and could not be located.

Also Read: Ray Rice Reveals He Considered Suicide: I Almost Felt Like It 'Wasn't Worth Living'

The 27-year-old was cut from the Carolina Panthers after being suspended for all but the first game of the 2014 season.

He was then picked up by the Dallas Cowboys in a one-year, $11.3 million deal. But on April 22, 2015, NFL Commissioner Roger Goodell suspended Hardy for 10 games after the league’s two month long investigation found that there was “sufficient credible evidence” that he had engaged in conduct which “violated NFL policies in multiple respects and with aggravating circumstances.”

That was later reduced to four games and he was back on the field Oct. 11, 2015 to suffer a 30-6 loss to the New England Patriots after making lewd comments about quarterback Tom Brady‘s supermodel wife, Gisele Bundchen, and promising to come out “guns blazing” against the Super Bowl champions.

Cowboys’  billionaire owner Jerry Jones also sparked controversy for brushing off criticism of his player, calling Hardy a “real leader” who has the respect of all his teammates and inspires America’s Team.

Hardy’s suspension came during a troubled year of crisis for the NFL which was dominated by Commissioner Roger Goodell’s mishandling of Ray Rice’s suspension for attacking his then-fiancée, Janay Palmer, in an elevator in  Feb. 2014. The former Baltimore Ravens star has not played in the NFL since despite now being eligible.

See the tweets about Hardy below.

COLUMN: Hardy should be rotting in a jail cell Instead, he’ll wear a star & be cheered: https://t.co/aozb33PRTq pic.twitter.com/wsAn2B8CZg

So Josh Gordon losses 2 seasons for smoking some weed and "needs help off the field" and Greg Hardy gets praised as a leader. #AmericasTeam

Hi @ATT I'm calling on you to withdraw sponsorship of @dallascowboys until Greg Hardy is cut. Show that we don't stand for domestic violence

“He’s, of course, one of the real leaders on this team."-Jerry Jones Sincerely clueless and truly disturbing https://t.co/CkkMY79Umh

Cowboys play the Eagles this week. I want one @Eagles played to step up, slam Greg Hardy in the mouth w/ a helmet & say, "How's that feel?"

If I'm the Cowboys, Greg Hardy is getting cut immediately, and if I'm the other 31 GM's, he's not getting a call.

Ray Rice's career could be over but Greg Hardy is still playing?? NFL as an organization is a joke