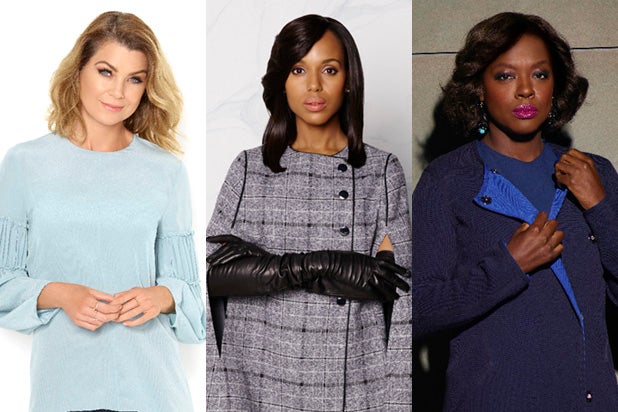 (Spoiler alert: Please do not read this post if you’ve not watched Thursday’s episodes of “Grey’s Anatomy,” “Scandal,” “How to Get Away With Murder”)

Thursday night on ABC belonged to Shonda Rhimes as “Grey’s Anatomy,” “How to Get Away With Murder” and “Scandal” all boasted back-to-back season premieres.

For those wanting to see the acclaimed showrunner herself, Rhimes was a guest on “Jimmy Kimmel Live!” later that night.

Grey’s Anatomy
Kicking off at 8 p.m. with the Patrick Dempsey-less Season 12 premiere, everything has changed on “Grey’s Anatomy” said Meredith (Ellen Pompeo) as she settles into life as a widow and mother-of-three a year after McDreamy’s death.

Following the heartache and tears of both characters and viewers alike last season, Rhimes has promised a more lighthearted year but some Twitter users still said they were “crying.”

While another Twitter user simply concluded “Tequila is awfully talkative.”

So excited for #GreysAnatomy

Shout out to the Chinese nurse that has always been there with them during surgeries. #INoticeYou #GreysAnatomy

“Scandal”
Kerry Washington is back for Season 5 of “Scandal,” and while Olivia and Fitz (Tony Goldwyn) are still together, everything else is in a state of chaos. With an evil queen, a Princess Diana-like car crash and the expected dose of back-stabbings and espionage, returning viewers were not disappointed with the level of drama.

One Twitter user predicted that the new onscreen romance is “gonna be a bumpy ride to get where this relationship is destined to be,” while others speculated about the fate of Jake (Scott Foley), who met a bloody demise at the end of the last episode.

Secrets are like water falls, they ultimately spill over cliffs of self-delusion. #Scandal

Even while he's hollering at @kerrywashington you can still see the softness in his eyes, Excellent acting! @tonygoldwyn Aweeee #scandal

"She had one job. To give us an heir and a spare." The Queen got bars. #Scandal

Have we actually ever seen Fitz "run the country"? #Scandal

@scottkfoley Jake went back to the island didn't he? #ScandaI

Also Read: 5 Takeaways From Shonda Rhimes' Elle Profile: 'My Black Is Not Your Black'

The strength of the hard-hitting roller coaster episode and the depth of talent from Davis was praised on social media, with one Twitter user describing it as “jaw-dropping, mind blown, speechless.”

“I love that Viola Davis is playing this strong, sexual character who crushes your soul and tosses her cookies around,” wrote another.

I'm telling you most of your fave tv leading ladies are calling up their agents to beef up their scripts cuz Viola is NOT playing. #HTGAWM

That's how you do a season premiere!! Well done!! #DatMurda #HTGAWM

Who else is watching the 11 o'clock local news hoping for more clues to how Anna got shot? #HTGAWM

I love that Viola Davis is playing this strong, sexual character who crushes your soul and tosses her cookies around. #HTGAWM

She quoted Tubman and y'all were crying, talmbout, "We need diversity!" Now it's, "She go both ways, why they messin' up the show?" #HTGAWM