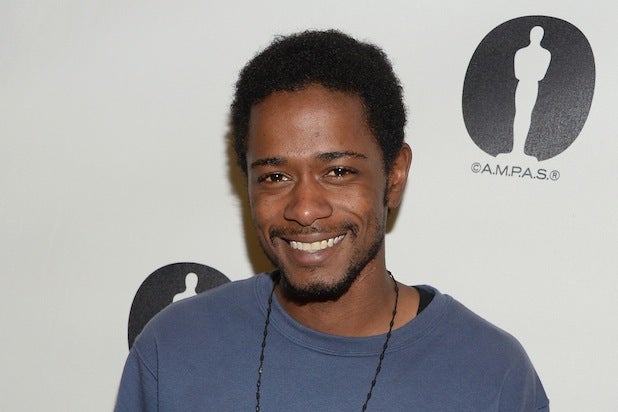 “Short Term 12” star Keith Stanfield is proof that with talent and perseverance, it’s never too late to turn your life around. Just a few years ago, the 22 year-old actor was “working in a weed factory learning the science of marijuana” and now he’s an Independent Spirit Award nominee and an Oscar contender for the original song “So You Know What It’s Like,” which he co-wrote with director Destin Daniel Cretton.

“There were lot of things that were personal for me. I wasn’t performing so much as kind of feeling the neglect that [my character] Marcus was feeling. Feeling hopeless, with no one to confide in — not even the people that brought you into this world,” explained Stanfield, who plays a troubled teenager in the film.

As the only actor from the 2008 short film of the same name to make the leap to the feature, Stanfield had developed trust with  Cretton and cinematographer Brett Pawlak. Still, he had to audition again for the director.

Stanfield had been helping raise marijuana seeds as part of a legal grow operation when he checked his email and discovered unread messages from Cretton, who wanted to make sure Stanfield could deliver again.

“He didn’t know where I was at, anything could’ve happened. I auditioned in the living room and when I looked up he was crying,” Stanfield recalled. “I picked up on the things that I did or didn’t do in the short that made it authentic. I was very uncomfortable and too self aware in the short but with the feature I was completely relaxed and confident and that allowed me to perform.”

The actor purposely didn’t develop much of a relationship with anyone on the cast, which includes Brie Larson and John Gallagher Jr., explaining that he “was very focused and wanted to maintain my character’s disposition.”

“Short Term 12” ending the year as one of the best reviewed films of 2013 with a 98 percent fresh rating on Rotten Tomatoes. The movie is being hailed by critics and audiences alike, with Stanfield and Cretton’s original song “So You Know What It’s Like” earning special attention from Oscar pundits.

Not only is the song vital within the context of the film rather than play over the end credits, but it’s the highest-profile rap track, which may help distinguish it from other songs in the category, many of which hail from animated films. The Academy has rewarded rap songs in the past, with Three 6 Mafia winning an Oscar for “Hustle & Flow’s” memorable tune “It’s Hard Out Here for a Pimp.”

Stanfield credited Pawlak with capturing the rawness of his musical performance. “It’s a testament to Brett, who got all up in my face. I was looking down at the paper and saw him in my peripheral. You kind of go into this weird space where you just black out all this shit around you. I was in the moment just feeling it.”

Born in San Bernardino, Stanfield moved out to the desert when he was 11 years old and started exploring. “My brothers and sisters would stay in the house but I was pretty curious, so I learned a lot of good things and bad things,” he told TheWrap. “Victorville gave me opportunity to go inside and explore my imagination a bit.”

Stanfield, who has been performing since he was 15 years old, had been looking for gigs on the Internet when he was discovered by the John Casablancas school in Orange County, which helps prospective students gain representation. He signed with Abrams Artists for commercials, but enjoyed working in film more.

“It’s different when you’re showing a facet of yourself, and that’s a testament to Destin,” Stanfield said. He was his director was nervous on the feature shoot “because there was more at stake than when he did the short, but other than that, he allowed all of us to find it within ourselves,” Stanfield said, adding, “I know what it’s like to go through struggle. I’m feeling a little bit more balanced these days.”

Indeed, Stanfield is balancing several different creative careers these days. “I’ve got this group called Moors. My producer, HH, makes sounds, so I’m writing to his beats. My focus is anything that allows me to express myself. Rap, dance, photography. Those are my forms of expression.”

Stanfield definitely has more offers since his breakout performance in “Short Term 12.” “There’s been a snowball effect,” he acknowledged. “There are a lot of things floating around. I’m just trying to take my time and see what comes naturally. See if I feel it.”

The actor will soon be seen in the indie movie “Memoria,” based on one of James Franco‘s short stories from his book “Palo Alto.” He’s also planning to star in a movie in which he’ll play an autistic character. “My two little twin brothers have autism, so I grew up around it and misunderstood it for a long time,” he said. “I just want to play roles that challenge me and give me a hurdle to jump over.

“But I’m open to anything as long as it resonates with me.”