Siegfried Fischbacher, one-half of legendary Las Vegas magic and animal act Siegfried & Roy, has died, according to The Washington Post. He was 81.

Fischbacher, who was born and raised in Germany, passed away at his home in Las Vegas, Nevada on Wednesday, The Washington Post reported. His publicist, Dave Kirvin, told the D.C. newspaper that the cause of death was pancreatic cancer.

TheWrap reached out to Kirvin for confirmation and comment on this story, but we have not immediately heard back.

“Today, the world has lost one of the greats of magic, but I have lost my best friend,” Fischbacher said in a statement following Horn’s death. “From the moment we met, I knew Roy and I, together, would change the world. There could be no Siegfried and Roy without Roy, and no Roy without Siegfried.”

“Roy was a fighter his whole life including during these final days,” Fischbacher’s statement continued. “I give my heartfelt appreciation to the team of doctors, nurses and staff at Mountain View Hospital who worked heroically against this insidious virus that ultimately took Roy’s life.”

The duo met when Horn was working as a steward on a cruise ship where Fischbacher was performing his magic act onboard.

Horn stepped in to assist, and afterward said, “Disappearing rabbits are ordinary, but can you make a cheetah disappear?” Little did the ship’s captain know, but Horn had smuggled his adopted pet cheetah, Chico, on the ship. 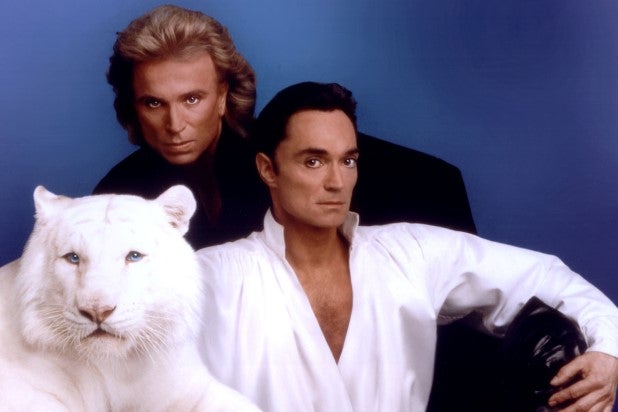 Sigfried and Roy in their heydey (Photo: Getty)

After 50 years of performing together, Siegfried & Roy ended their run when Horn was attacked by a white tiger during a 2003 show at the Mirage in Las Vegas. The animal bit into Horn’s neck and carried him offstage.

Horn nearly died on the spot due to blood loss. He suffered a stroke.

The attack severed Horn’s spine and permanently affected his ability to walk and speak.