“I'm not one of those complicated, mixed-up cats. I'm not looking for the secret to life…. I just go on from day to day, taking what comes.” –

My dad, Kenny O'Donnell, hated this kind of stuff.

Not the party, not the beautiful women, but being the guy delivering the bad news. 'Course, as John Kennedy's aide, that was his job. 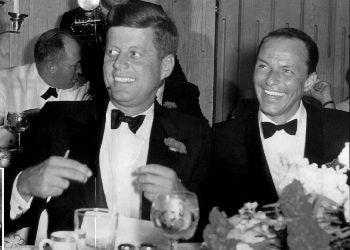 His presence was always an unwelcome sight to Kennedy at these moments when he was not the candidate for the White House, senator from Massachusetts, but rather a young handsome guy, partying with his pals, Frank Sinatra, Dean Martin, Sammy Davis, Peter Lawford.

Or “brother-in-Lawford” as Frank had dubbed him once, and it had stuck. ‘Course only Frank could use it.

No, Jack didn’t like seeing Kenny at these moments, 'cause he was having fun and Kenny … well, Kenny always meant work.

Not 'cause Jack didn’t like Kenny. Jack did. I mean come on, they were both World War II heroes, genuine tough guys, political animals of the Boston “Irish Mafia” variety and, most important, Kenny always had Jack’s back.

But here in Vegas at a party hosted by Frank and a few others from Chicago — whose names were far better left unmentioned — well, man, Kenny’s presence could only mean work or trouble or sometimes both.

The only person who could be more of a pain in the ass at moments like this was Jack’s younger brother Bobby.

As Kenny pushed through door, Perry Como’s “Papa Loves Mambo” was playing in the background as the crowds of people on the roof deck were singing, dancing, drinking, mingling and laughing. Beautiful Vegas showgirls, men in business suits and an inordinate number of waiters carrying large plates of overflowing food and drink.

Kenny cut through the swaths of people. He was very much the man in control while being surrounded by a crowd that has let loose and is having fun.

He stopped momentarily to survey the crowds, looked up. The Sands Hotel moniker in blinking lights high above all the others on the strip attractions. It said: RAT PACK. Frank, Dean, Peter and Sammy’s names. He stopped for a moment to take it in.

Not bad for a poor working class Irish kid from Worcester, Massachusetts.

“Best damn f—ing job in the world,” he had told his sister Justine. 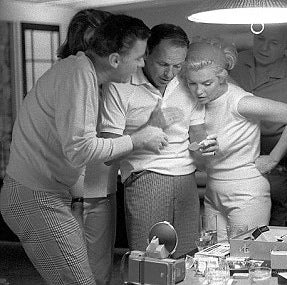 Frank’s private rooftop bungalow separate from the main party with its own pool and bar. The party well underway. Kenny could see Jack, Marilyn, Pat, Pierre, Sammy, Peter and others all sitting at the bar drinking, laughing and joking. Jack, Marilyn and others now dressed casually.

Marilyn was singing, snapping her fingers.

She was trying to remember the words to a song, “The words do something like this … Hmmm-mmm-mmm — it's love I’m after or maybe just money or both … ”

She burst out laughing. Clapping her hand over her mouth. The words have escaped her. Maybe too much champagne, too many memories to sift through or maybe she never really knew them? Who cared, Kenny thought. Even without completing the song, she was still beautiful.

“The song sounds better when I can actually remember the words.” Everyone laughed. Were they laughing with her or at her?

“I hope so,” Frank quipped, “because if that’s all you got, you're in real trouble, kid.”

Frank began to snap his fingers as Dean immediately moved to the piano and picked up the tune. They both of them started crooning.

Frank suddenly spied Kenny walking towards them. Jack saw him, too. He sighed. It was time to go.

Jack got up. Shook Frank’s hand. 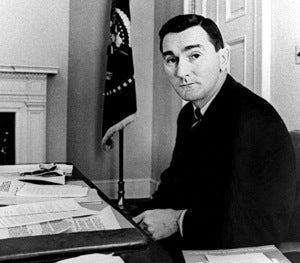 “Oops. Look at his face. Time to get serious. Fun’s over.” Frank laughed.

Kenny allowed a slight smile at the corners of his mouth.

Frank ducked below the bar and pretended to hide. Dean played deep solemn notes on the piano in lock-step with Kenny’s footsteps.

“Where the hell have you been? We haven’t seen you since the show,” Jack asked sharply.

“Probably a bar or the CIA,” Peter said, sipping his drink.

Kenny shrugged. He was tight. On alert. “Here, there, around.” Translation: You probably don’t want to f–in' know.

Yeah, Jack got that. He rose. Time to go.

“We make any money at the private fundraiser?”

The silence was defeaning.

Yeah. That appears to be the problem.

It is where the money comes from — or maybe the who it comes from is more to the point.

The Mob, Kenny said, his voice low, cold, terse. "Remember them? They'd be the guys your brother has been chasing all over the country."


“Money is money, Kenny,” Frank said firmly. Interrupting. Giving Jack a way out of the conversation.

Kenny nodded. He understood, but the money had to go back.

Don't know anything about it, Jack replied, 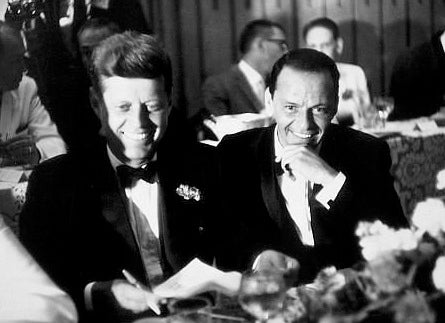 Frank shook his head, no.

You can't have something for nothing in life.

The party continued. Jack wasn’t leaving. Not yet. Peter handed Kenny a drink.

“We’ve gotta talk,” his expression said. “Yeah,” Kenny replied. “We have a problem.”

Frank turned to join Sammy, Marilyn and the rest of the gang. He stopped, slight turn to Kenny.

Nobody said it out loud — the name didn’t have to be said.

But, man oh man — was Bobby gonna be pissed.

Kenny watched as Jack joined at the bar. Dean playing the piano. Sammy, too interested in some blonde way too tall for him. Kenny gulped the last part of his drink. Jack caught his eye. The look was cold.

Jack nodded towards the exit. “Get lost,” he mouthed to Kenny.

Kenny nodded. He didn’t need to be told twice. If Jack wasn’t going to listen now, he’d have to listen later.

Kenny slammed his empty glass down harder than intended. It reflected how he really felt.

Turned towards the exit. Just as he arrived, he heard his name called. It was Lawford.

“I haven’t seen you move that fast, Peter, since I saw you chasing that actress, what was her name?” Kenny quipped. His voice low, controlled, but the shot, a direct hit.

Peter smiled. Then, conspiratorily: “I’ve got to talk to you.”

“Marilyn,” They heard Frank call as they left.

Peter followed Kenny, who by now was halfway to the bar.

Kenny slid into a seat.

The bar was dark, smoky, quiet. It was late. Kenny nodded at the bartender. He poured Kenny the usual.

Peter slid into the seat. Nodded at the bartender for the same.

They sat in silence.

Peter pulled back in his seat for a moment.

“Why? What the hell does that mean?”

“Don’t get defensive,” Kenny laughed. “I just mean it is pretty sad that you would leave a party like that, especially with Marilyn Monroe, to join me. That’s just f—in' sad.”

Peter felt he had to be sure Kenny understood.

“Maybe Jack doesn’t understand where this comes from. I suspect he doesn't. He's too busy to get the full picture, you know?"

Peter sighed. “You’ll take care of it. Get rid of it. Return it. Quietly."

Kenny nodded. They ordered another round.

Peter was relieved. Kenny. Well, Kenny was not relieved. After all he still had to explain all this all to Bobby.

Yeah, trouble. Kenny figured that this was just the beginning and hell, they weren’t even in the White House yet.

Just then Kenny and Peter felt, rather than heard, something. Right behind them.

Kenny tapped the top of the glass.

Then they both stood up. One motion.

Kenny and Peter turned. Kenny recognzied the men at once.

He knew them from the rackets committee days when Bobby was kicking their bosses' asses across the senate committee room in front of a national television audience.

Chicago boys. Probably sent by Giancana. Or maybe, just maybe, they just happened to be here.

Who knew? After all, it was Vegas.

Kenny only knew one thing. He sure as hell wasn't going to stop and ask them questions.

Kenny and Peter grabbed them by their collars and carried them to the window.

“No, you play through first. It is my understanding that you Irishmen can be a bit slow.”

With that Kenny tossed the fellow through the plate glass window where he landed with a hard crack and crash on the pavement.

Peter, turning to Kenny, “Veddy, veddy John Wayne of you!"

With that, Peter tossed his burden on top of Kenny’s. The two looked over the goons on the ground, dusted themselves off. Shook hands.

Peter turned to Kenny. “Drink much?” Kenny nodded, “Whenever possible.”

“Good,” Peter replied matter of factly. “Then follow me.”

They resumed their seats. Sipped their drinks, then Peter turned to watch the chaos.

“Place is becoming a bit of joint, don’t you think?” Peter said matter of factly.

Kenny nodded. Wordlessly. Tapped the glass. Another round.

Kenny laughed to himself. The two men then lifted their glasses. Clinked them together.

BIO Helen O'Donnell
Helen O’Donnell is the daughter of President John F. Kennedy’s Political Aide Ken O’Donnell. She is the author of "A Common Good: The Friendship of Robert F. Kennedy & Kenneth P. O’Donnell." She also recently formed her own production company called Platinum Goddess Productions, Inc. She is a freelance writer and producer.

Helen O’Donnell is the daughter of President John F. Kennedy’s Political Aide Ken O’Donnell. She is the author of "A Common Good: The Friendship of Robert F. Kennedy & Kenneth P. O’Donnell." She also recently formed her own production company called Platinum Goddess Productions, Inc. She is a freelance writer and producer.
x
Looks like you're enjoying reading