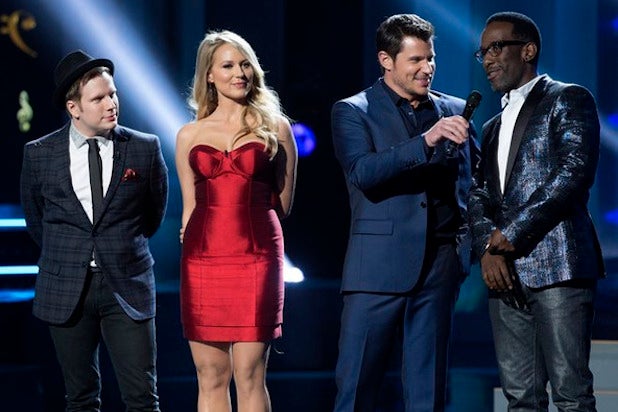 Nick Lachey knows the value of a cappella. It’s what catapulted his Grammy-nominated 98 Degrees to boy band stardom during the 1990s. And as the host of NBC’s “The Sing-Off,” he’s giving others a similar opportunity.

“A cappella music is what got us signed to Motown [Records],” Lachey said of his fellow band mates brother, Drew, Justin Jeffre and Jeff Timmons.

The musical competition pits a cappella groups from across the nation against each other as they vie for a $50,000 grand prize during the two-hour event.

“It celebrates a cappella music and gives a deserving group the platform that I was fortunate enough to have,” Lachey said.

The winners will be decided on pure vocal – and some beat-boxing – talent alone. No band. No back-up singers.

“I’m thankful I don’t have to make that decision,” the 41-year-old said of choosing a winner. “But, this is great music. Some of the most talented singers you will ever hear, doing what they do best.”

Since its inception, “The Sing-Off” has toggled between an episodic and a one-night series. Last December, after the group Home Free clinched the top prize, the show aired its low-rated finale earning a 1.3 rating in the advertiser-coveted 18-49 demographic.

Lachey said the competition’s return speaks to its “feel good” vibe and added the he was often asked on the street about when the show will return.

“It’s a great fit for ‘The Sing-Off’ to be around this time of the year. It’s cemented itself into the fabric of what the holidays are about,” he said.

And the holiday event will bring the return of Season 3 and Season 4 winners, Pentatonix and Home Free, respectively, who will lend their vocal talents. Viewers may also have the chance to see this year’s judges and Lachey take the stage, as well.

“We’re all singers. We all love music, and it’s great to be able to perform. I’m just thrilled to be back,” Lachey said, jokingly adding that “there better be talk about Season 6.”