Tom Sizemore is about to take on an overly familiar role — defendant. 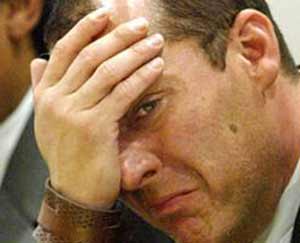 A hearing in L.A. today determined the "Black Hawk Down" actor, who has become notorious for his numerous arrests for drugs and domestic violence charges, will go on trial on domestic battery charges on Feb. 8, 2010.

If convicted, Sizemore could face a hefty fine and a year in jail.

The morning after a fleeting appearance on VH-1’s reality series "Celebrity Rehab With Dr Drew," the actor was nowhere to be seen in court. However, his case, steaming from an incident between Sizemore and a woman on Beaudry Avenue, just east of downtown L.A., on the evening of Aug. 5, 2009, was top of the dock.

After a brief conference with Dep. City Attorney Lee Calbwell and Sizemore’s lawyer Ronald Miller, judge Karla Kerlin announced the trial by jury to begin next month.
"it’s the American way," Miller told TheWrap. "Tom is not guilty, and if the People won’t accept that, then a jury trial is the only way to go."

In 2003, the actor was convicted  of the assault and battery of then-girlfriend Heidi Fleiss, who is alos on this season’s "Celebrity Rehab," where the two are having something of a surprise reunion.