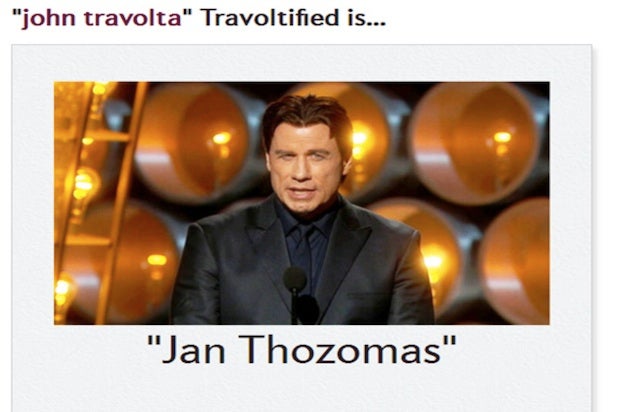 The Travoltafier widget racked up nearly 10 million unique users by Thursday and was adding roughly 100,000 hits an hour.

Definition of ambivalent: The John Travolta name generator is the most popular story in Slate history. http://t.co/nT4kJp7J2Q

The special feature allows users to type their name into a script and discover how Travolta might garble their own name.

The site had previously tried a Carlos Danger name generator last summer to spoof Anthony Weiner’s sexting name, which also did well for the site.

Plotz told the Nieman Journalism Lab he had mixed feelings about the overwhelming success of the article:

The Travolta name generator is a delightful piece of work that brings pleasure to millions — literally millions — of readers. It’s fast, fun, and on the news, and I am unbelievably proud of the clever work that went into it, and glad for the joy it has brought so many readers. On the other hand, I have to giggle that this project is attracting millions of readers, and crushing stories about Ukraine or Obama under its boot. And on the third hand, one of the most popular Slate stories in the past six months before Travolta came along was Josh Levin’s The Welfare Queen, an 18,000-word masterpiece about the woman Ronald Reagan villainized for bilking the government, who turned out to be even more fascinating, and loathsome, than Reagan ever could have imagined.

Slate’s venture into interactive content builds upon the dynasty that BuzzFeed has innovated in recent weeks. The popular social content sharing site had a massive hit last year with “Which Grease Pink Lady Are You?” Discovering they had a successful formula on their hands, BuzzFeed’s editorial team snapped into action and started filing voluminous pop culture quizzes. Facebook feeds became flush with content asking “What State Should I Live In?” which garnered 39 million total views, and “What City Should I Live In?” with 20 million. Sensing there was a way to monetize the quiz formula, BuzzFeed’s creative team created sponsored quizzes; notable examples include a Barbie quiz and a Game of Thrones quiz which have already reached over 1 million views. Google Trends show that people are actively searching for quizzes.

Summer Anne Burton, BuzzFeed’s Managing Editorial Director who’s been leading the charge on quizzes, spoke to TheWrap about the viral news angle that sites are taking with creating sharable quiz content.  She pointed to the recent phenomenon of celebrities participating as proof the medium has forever changed our news culture.

“Sharing something that reveals a truth about yourself — even if it’s a frivolous quiz result — is a way of relating to the world around you,” Burton told TheWrap. “Celebrities taking BuzzFeed quizzes, especially ones that mention them, is a new way for them to communicate and play with their fans and followers. And when they don’t get themselves or their characters, it’s all the more fun and maybe even revealing about the gap between their public personas and their private lives. Mostly, though, our quizzes are a game that everyone is playing, and famous people want to have fun too!”