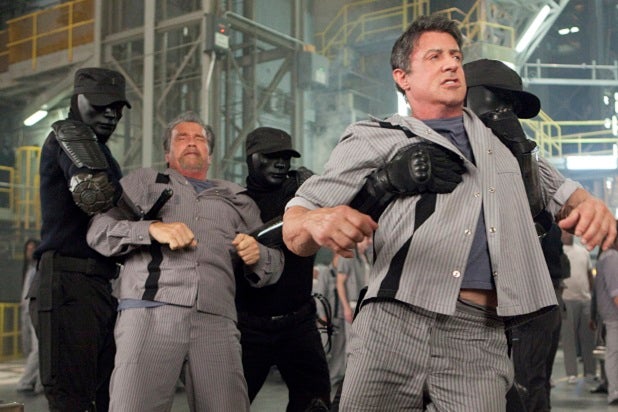 The best box office days of Arnold Schwarzenegger and Sylvester Stallone may be behind them in the U.S., but the aging action stars still pack some punch abroad.

Their latest effort, Summit Entertainment’s prison break movie “Escape Plan,” was a disappointment when it opened to less than $10 million domestically last month. But the studio reported Monday that it’s up to $63 million at the foreign box office, not bad considering Stallone is 67 years old and Schwarzenegger is 66.

“Escape Plan” opened roughly a week ago in China and has already brought in $22.8 million. It’s also brought in more than $6 million from several Middle Eastern markets.

It’s currently playing in 53 international markets with France and Germany scheduled to open this coming weekend and South Korea, Australia and Japan still ahead.

Summit and Emmett/Furla, its equity partner on “Escape Plan,” sold off many of the foreign rights on the $50 million action film before its release.

Stallone’s movies have brought in $2.9 billion at the worldwide box office since he stepped into the ring for “Rocky” back in 1976 and Schwarzenegger’s have totaled $3.8 billion since he appeared in “Stay Hungry” that same year. But Arnold’s “The Last Stand” opened to a dismal $6.2 million in January, and Sly’s “Bullet to the Head” did even worse, debuting to $4.5 million in February.

Schwarzenegger, two years removed from his stint as California’s governor, is set to start shooting a reboot of “The Terminator” in April for Paramount. And Stallone will be back on the big screen at Christmas with Robert De Niro in the Warner Bros. comedy “Grudge Match.”