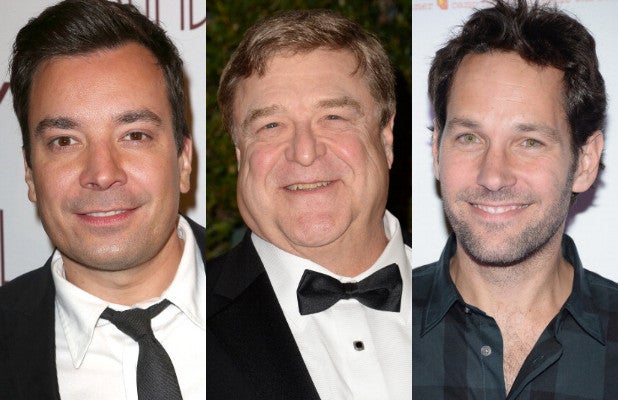 “Saturday Night Live” announced Thursday its three hosts and accompanying musical guests for next month: chronologically, Paul Rudd will be paired with One Direction, John Goodman with Kings of Leon and Jimmy Fallon with his BFF Justin Timberlake.

Sounds like it will be a “White Christmas” indeed in Studio 8H.

All told, that adds up to 12-and-a-half white men gracing the famed stage in December. No women, no people of color — save 1D member Zayn Malik, who is half Pakistani.

TheWrap’s inquiry to NBC about the bookings was not immediately returned.

While independently that may not be newsworthy at all, “Saturday Night Live” has recently gone through a very public diversity controversy. This offseason, following key departures, the long-running NBC comedy hired entirely Caucasian newcomers.

The skin color of the new hires did not go unnoticed by the media — or some cast members:

“They need to pay attention,” Jay Pharoah told website theGrio in late September, even suggesting a hire. “Her name is Darmirra Brunson …Why do I think she should be on the show? Because she’s black first of all, and she’s really talented. She’s amazing. She needs to be on ‘SNL.’ I said it. And I believe they need to follow up with it like they said they were going to do last year.”

Later, cast mate Kenan Thompson stood up for his show and executive producer Lorne Michaels, saying that “SNL” has trouble finding African-American women “that are ready.”

When TheWrap recently spoke to some of the so-called minor leagues of sketch comedy for a story on diversity, such as iO (Formerly Improv Olympic) and Upright Citizen’s Brigade, we learned that the schools are making efforts to recruit diverse classes of students. The sketch comedy and improv industry is still mostly white males, but change is in the air — and on the stage. The hope is that the new talents funnel to the top — which is still “Saturday Night Live.”

“SNL” has not regularly employed an African-American woman since Maya Rudolph was a player in 2007. The show brought in minorities as hosts or musical guests just a handful of times this season — singer Janelle Monae performed as Bruce Willis hosted. Lady Gaga hosted the show on Saturday, where R. Kelly joined her on stage; Kerry Washington helmed the prior episode.