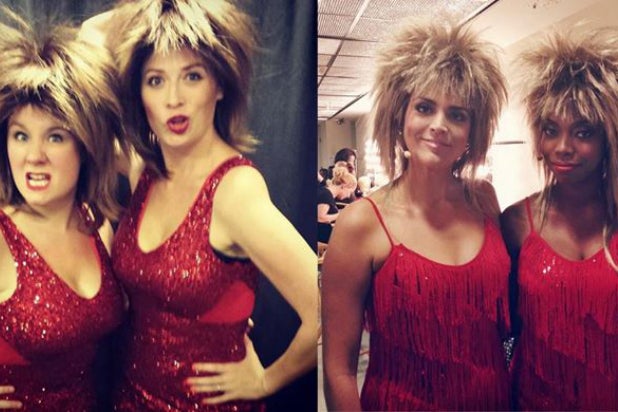 “Saturday Night Live” is denying accusations that the show writers ripped off the sketch “River Sisters” from The Groundlings comedy troupe.

An individual close to the show passed off the similarities between the “SNL” and Groundlings versions as mere coincidence. The individual told TheWrap that the “SNL” writers were unfamiliar with The Groundlings sketch in question.

“It’s a common idea since Tina Turner is such an iconic figure,” the person said. “The similarities represent parallel thinking in the comedy world.”

Also, the Groundlings sketch on YouTube that many are referencing — including the specific video post that we have embedded below — was uploaded on Sunday, the day after the “SNL” sketch aired. The theater appears to be one in Los Angeles, while “Saturday Night Live” films in New York City.

Here’s what all of the hubbub is about: This past weekend, “SNL” featured a skit in which host Sarah Silverman and cast members Cecily Strong and Sasheer Zamata played Tina Turner impersonators on a Nebraska riverboat.

In the skit, the three swap sob stories while performing Turner’s “Proud Mary.” The sketch went over fine, but it just had that one problem: Two members of sketch comedy school The Groundlings — Vanessa Ragland and Kimberly Condict — had performed a very similar skit for six weeks this summer, according to Condict.

Alright. So this is weird. And a delicate subject… I, like many of my friends, do sketch comedy. I have a lot of influences, especially SNL to thank for that. Over the years, I, and many of my friends have performed in front of Lorne Michaels and his staff. And this is not an attack on SNL or anyone that has ever been a part, will be a part, or was a part of it… I have very dear friends who have written and performed or still do, on that show. The respect that I have for those people, for the countless others I don’t know and the television INSTITUTION that is SNL is off the charts…And I’m sure that goes without saying for most everyone reading this.

But, over the years I have seen MANY, MANY sketches flat out stolen from my friends by Saturday Night Live. Nearly verbatim. Word for word… And everyone in our community goes “Oh man. That sucks.” and nobody says anything because I guess SNL is still some dream for some people or they don’t want to get involved, or a million other reasonable things that stop people from standing up for each other when things are blatantly wrong.

SHARE this photo and let people know that STEALING other peoples art and passing it off as your own like you’re the biggest bully in the room is NOT okay, and stop being silent about the blatant theft of other people’s creations.

And a video of the Groundlings sketch and the “SNL” one: