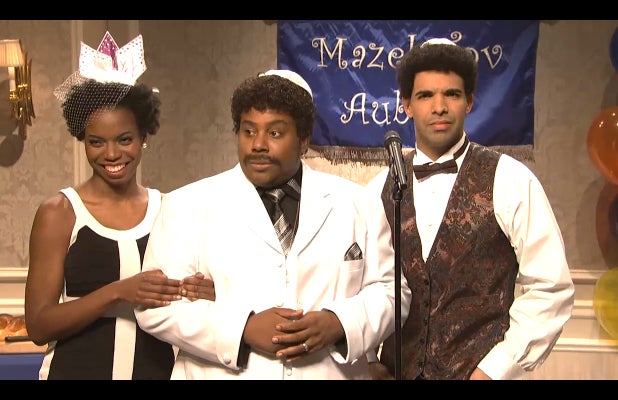 In case you forgot, Drake is black, Jewish, Canadian, and dated Rihanna that one time. He also starred on “Degrassi,” an acting experience that he’s totally proud of and that probably made his host-musical guest double duty a lot more plausible than, say, Lady Gaga’s.

During the show’s cold open, the cast took shots at scandal-ridden Chris Christie, Alex Rodriguez and Justin Bieber on a “Piers Morgan Live” parody. Drake’s first appearance on the show was as the delusional former Yankees player, who in the skit blamed autocorrect for the hundreds of damning text messages that suggest he used steroids — again.

The monologue was Drake’s opportunity to publicly apologize for introducing the world to the universally obnoxious term “YOLO” in the song, “The Motto.”

But it didn’t last long, and morphed quickly into a bar mitzvah skit. This was also the first glimpse we got of new cast member Sasheer Zamata, who played Drake’s not-actual-auntie Rhonda. “Mazel Tov” was the first of what promises to be many lines for Zamata in her run on SNL.

Seemingly in active response to complaints of lack of diversity, this week’s show hit the ground running with a BET show sketch about what hip-hop stars did before they were famous. Drake as Lil’ Wayne playing Steve Urkel on the early years of “Family Matters” was a crowd pleaser, as was “That’s So 2 Chainz,” which apparently holds the record for the most bleeps on a Disney Channel show.

Now in his home stretch before he debuts as host of “Late Night” on Feb. 24, Seth Meyers fended off more sexual advances from Nasim Pedrad’s dead ringer Arianna Huffington on Weekend Update. The punch line from last week’s Golden Globes was also the running joke of the segment, as a confused Jacqueline Bisset took the entire segment to make her way to the stage and got played off as soon as she got there.

The biggest highlight from the show’s second half was the delightfully absurd “Mornin’ Miami” segment, which channeled a bit of “Anchorman” and what we all imagine happens during the commercial breaks between overly peppy morning news anchors.

Watch the videos below: