This will be remembered as the “Saturday Night Live” in which Kate McKinnon‘s Hillary Clinton was so eager to please, she morphed into Bernie Sanders — after Larry David turned up again as Bernie Sanders, too. Meanwhile Jay Pharaoh’s Ben Carson took a beating while trying to endorse Donald Trump (Darrell Hammond).

Additionally, host/musical guest Ariana Grande accidentally said “shit” during a song about what scandal she would someday commit.

Welcome to our recap. (Here’s Grande saying the offending word, as captured by the New York Times’ Dave Itzkoff:)

Grande, joining the ranks of Justin Timberlake, Paul Simon, Britney Spears, and less than a dozen others, gracefully sidestepped the awkwardness and just said, “We’ve got a great show!” Whew. What was also unique about this episode was that she brought out feelings of, “Oh, that person whose music I only thought was okay before is actually funny!” — like Timberlake once did.

“It’s been a dream of mine to be on this stage since I was a little girl, which was two months ago,” she said, before busting into a song about wanting to get involved in a real adult scandal. Big points for her imitation of a botox face, and for delivering the line “Pot? Let’s smoke some crack, man!” to Pete Davidson.

But before we get ahead of ourselves, let’s do some recapping. The cold open of the show was obviously in keeping with most of the other episodes this season. Let’s start getting the hashtag of #MildlyFunnyColdOpenPoliticalDumpingGround to trend. Alright, this might be a little problematic, since it’s often #MildlyFunnyColdOpenPoliticalDumpingGroundWithSemiImpressiveCelebCameo.

Larry David brought back his Bernie Sanders, pleading with his supporters to stop posting so much about him on social media, saying he’s “not five-posts-a-day great.” And the next time we see Bernie Sanders wearing a baggie suit, we’ll chuckle to ourselves that he’s probably wearing pajamas under there.

Anyway, it was actually good that “SNL” got this out of the way at the top of the show, because obviously the main thing on everybody’s mind politically was the protestors against (episode 791 host) Donald Trump at recent rallies. The sketch on that subject played it too safe. Darrell Hammond did his best version of The Donald. And Jay Pharoah did his spot-on Ben Carson, saying “Bye America! It’s been weird.”

The punch line was that Carson was attacked at a Trump rally because Trump supporters thought he was a protestor. Har har har. But as with most of these #MildlyFunnyColdOpenPoliticalDumpingGround sketches, it was only mildly funny, because the truth is just so depressing.

Speaking of hashtags that we want to gain some traction, the next sketch was what we’ve been calling the #SNLFeedFiller, which means it’s the one that you’ll see in your social media feed during the next week. Kate McKinnon began the ad as Hillary Clinton, trying so desperately to capture the millennial vote that she morphs into Bernie Sanders. The slogan? “Feel the Bern. For Her!” Brilliant!

Next up was a parody of a pre-show for the Nickelodeon Kids’ Choice Awards. The sketch captured the awkward energy of those horrible pre-show shows, with the joke being that the hosts kept thinking that the awards were just about to begin, but they just wouldn’t. Grande, along with Vanessa Bayer and Taran Killam, kept up the energy in a polite but annoyed frenzy. They heightened the game well, and the kicker worked great.

Next up was a song parody of a feminist anthem, with an overwrought video. Featuring all the female members of the cast and Grande, frolicking meaningfully (yes, one can frolic meaningfully) on a beach, their song was called “This Is Not a Feminist Song.” The joke was that they couldn’t commit to actually writing a feminist anthem because it was too much pressure, and this video felt like they couldn’t commit to coming up with a better joke.

In the next sketch, Grande and Cecily Strong played beautiful mermaids comforting shipwrecked sailors, while Kate McKinnon was a hideous mermaid who was also part-blobfish. The sketch was a funny setup, with lots of disgusting quotable lines, but it was just too easy to do the “two of these people are hot and one is not” thing. Plus, could that joke ever be executed as well as Kristen Wiig‘s Dooneeese Maharelle character? Nope!

Another odd thing about hosts who are also the musical guests is when they take to the stage to get serious for three minutes after a half-hour of being funny. Larry David did a good job of easing this transition, by gloriously flubbing up his introduction of Grande’s musical performance.

Grande has amazing pipes, and “Dangerous Woman” was an okay showcase for these vocal abilities, but there were a few things that were just wrong here. Mainly it was the band, who looked like they were let out of a recording studio for the first time in years. Also, wearing a sports coat on one arm? Please let this be a trend her followers adopt.

“Weekend Update” did a better job handling the violence that has been surrounding Donald Trump’s campaign. One of Michael Che’s many great lines: “Can we just talk about how adorable this little old racist lady is?” Of course he was referring to this photo: 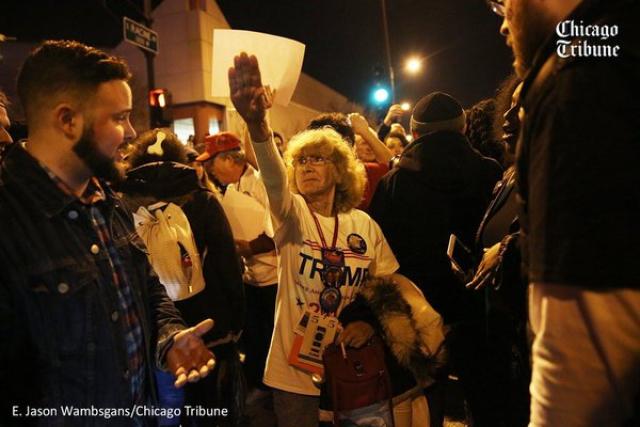 Also, Cecily Strong‘s Drunkest Contestant on ‘The Bachelor’ was a perfect new addition to her canon of characters. And although recurring characters can be annoying, Bobby Moynihan‘s Riblet character is always a welcome interruption on “Update.” The fact that he cut to a man-on-the-street segment that featured pre-taped footage of him on the street just for a “yo mama” joke was a great way to take this character further.

Ariana Grande‘s real star turn on this episode came when she played Chloe the Intern at Tidal Streaming Headquarters. The premise was that Tidal kept losing power, and Chloe had to step up and fill in the gaps of streaming, which gave her a chance to hilariously imitate Britney Spears, Shakira, Rihanna, and Celine Dion. But what was weird was that her Whitney Houston impersonation was so uncanny that it was the stuff of goose bumps. It wasn’t funny, but it sure as hell was moving.

The “Celebrity Family Feud” sketch was an easy base hit. Grande’s impersonation of Jennifer Lawrence was commendable and fun, harping on just how much of a “regular person” she is (or repeatedly says she is). Other highlights were Jon Rudnitsky as Scorsese (although it was too brief) and Killam as Tarantino.

Grande’s second musical performance, of “Be Alright,” was looser, weirder, and better than her first official song. Maybe that was because Larry David took the time to introduce her properly. Or maybe it was because of the men in tight turtlenecks who danced with her, kinda like a gender-bending tribute to the “Addicted to Love” video.

The final sketch of the evening, an apropos-of-nothing twist on the “How Do You Solve a Problem Like Maria?” scene from “The Sound of Music,” was awesome! Grande played a pissed off version of Maria, angry that the other nuns were talking smack about her behind her back.

All in all, a good episode, and one where Grande proved her worth as a viable triple threat. Sure, she may have proved this during her tenure on Nickelodeon, but not to as many adults as she did tonight.