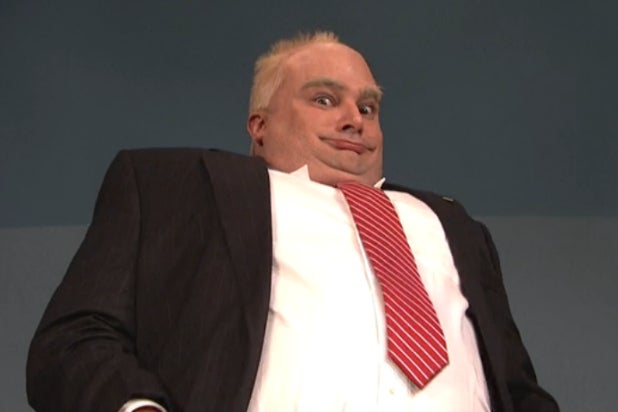 Toronto Mayor Rob Ford’s antics and the failed Obamacare website launch are pretty much making it too easy in the writer’s room at “Saturday Night Live.”

The embattled Canadian politician has spiraled down from a crack-cocaine use admission to aggressively confronting drunk driving allegations, all the way to lewdly denying oral sex allegations at a press conference this week. Each time apologies are in order, it seems Ford digs his crazy hole to unpredictable depths.

“SNL” had a field day with the free fodder, as Bobby Moynihan played a fantastic Ford to Taran Killam’s straight Canadian Broadcasting Company news anchor. In the cold open, following a slew of faux press events that each opened up new cans of worms for the mayor to apologize for, Ford searches for a show where his unbelievable lies will still be bought by gullible newsmen and women. Naturally, he finds a home where mass apologies have been in order recently: “60 Minutes.” The cold open sketch video is below.

“Are you feeling depressed? Rundown? Like you just can’t win?” another sketch opens, adding “Are you the President of the United States?”

The fake “SNL” commercial for Paxil: Second Term Strength sees Jay Pharoah as Barack Obama, downing a ton of anti-depressants to get him through the following symptoms that the real Commander-in-Chief must deal with: Benghazi, the NSA scandal, the IRS scandal, the AP scandal, the Petraus scandal that time Jay-Z and Beyonce went to Cuba, and of course, Obamacare website problems.

Ironically, the Affordable Care Act does not cover Paxil: Second Term Strength, the commercial concludes with.