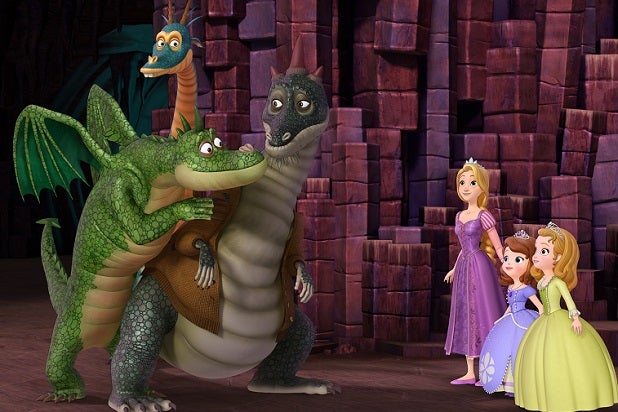 Anna Camp and John Michael Higgins are making a visit to Enchancia on Nov. 23 — and Mandy Moore and Oliver Platt are coming along too.

“Pitch Perfect” pair Camp and Higgins, “Saved!” actress Moore and “Fargo” actor Platt will make their “Sofia the First” debut with the special “Sofia the First: The Curse of Princess Ivy,” which will premiere Nov. 23 at 7 p.m. on Disney Channel.

In the special, Amber (voiced by Darcy Rose Byrnes) discovers Sofia’s amulet is magical and takes it without permission, inadvertently summoning an evil princess, Ivy, who’s set on taking over Enchancia.

Camp will play the nefarious Princess Ivy, while Higgins will play the self-appointed leader of an all-dragon a cappella group. Pratt will voice the character of Everburn, Enchancia’s oldest-living dragon.

Moore will reprise the role of Rapunzel from Disney’s “Tangled.”

The week prior to the special’s premiere, Disney Channel will air “Sofia the First” episodes featuring Disney princesses Cinderella, Snow White, Ariel, Aurora, Belle, Jasmine and Mulan. The network will also debut “I Am a Princess” interstitials featuring stories from Disney movies including “Frozen” and “The Little Mermaid,” as told through the eyes of children.

A preview of “Sofia the First: The Curse of Princess Ivy” and a game based on the special will debut on WATCHDisneyJunior.com and the WATCH Disney Junior app starting Nov. 10.